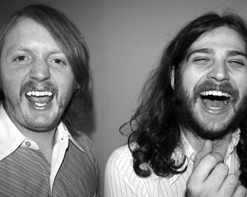 Hello to all of my fellow indie rock brethren! It’s Andy Gesner and the staff from HIP Video Promo, here to spread the word about a new indie band that’s got us extremely excited. And we’ve got a message for everybody who knows Phil Pirrone and Nathan Lindeman from their work in A Static Lullaby: before you spin the Casket Salesmen album, check your expectations at the door. Pirrone and Lindeman both distinguished themselves as excellent instrumentalists in their previous band, but A Static Lullaby didn’t give them the opportunity to stretch out very much or to play the style of music closest to their hearts. The bassist and guitarist – best friends on and off the stage – both love cinematic, experimental, neo-progressive rock. And withSleeping Giants, they’ve delivered a gigantic album meant to pound out of van speakers on long, strange trips: dripping with Seventies-style, but more accessible and better-sung than other recent releases which invoke that era. And we’re not the only ones crowing about Casket Salesmen; Sleeping Giants was the #12 most added release at college in it’s first week of release, and publications such as AP andAbsolute Punk have been lining to give their glowing endorsements.

What’s more, the record was created on their own dime. True indies, the Casket Salesmen have put out Sleeping Giants on their own Longhair Illuminati imprint. But complete creative control hasn’t made Pirrone and Lindeman self-indulgent: on the contrary, these stormy neo-prog compositions feel pointed, smartly-sculpted, hummable, even at times succinct. Even the three instrumental tracks never vanish into smoke-swirls – every note on Sleeping Giants serves a deliberately-defined aesthetic purpose.

It helps that the principals are such phenomenal musicians. Guitarist Lindeman pilots his six-string into the storm; his leads manage to evoke David Gilmour and M. Ward, and sometimes at the same time! Pirrone’s bass playing is at once machine-like and organic – when he locks into a groove, it’s as if he’s holding the song over a smelting flame with a set of iron tongs. He’s got some of Nick Olivari’s muscle, and more than a pinch of Chris Squire’s adventurousness, and a sense of harmony that’s all his own. But the talented duo don’t hog the spotlight: all the guests who play on Sleeping Giants are top-notch, including drummer Ryan Knights of the super-psychedelic Mythmaker, and Steve Borth, who rips a mesmerizing sax ride in “The Anaheimlich Maneuver”. Further confounding expectations, Pirrone is an expressive and empathetic singer with an elastic voice and a knack for burning choruses into the heads of their listeners.

“I’ll Buy That For A Dollar”, the lead track and first single (and a reference to a dystopic TV comedy in the movie Robocop), is an explosive performance: a story of persistence in the face of confusion, and a last grasp at sanity. Director Eric Noren – best known for his irreverent skateboard films – teases out the playfulness beneath the prog-rock fury, pairing the Casket Salesmen track with a video that finds humor in odd juxtapositions. The main characters are two man-sized penguins – or just men dressed in penguin suits. We watch the birds wake up in their bunk beds, play a game of chess, drink, practice the piano, and then get down to their business: distributing red balloons to residents of a typical California suburb. Some who accept the balloons are transformed into children, and find themselves skipping after the birds and their balloon-distribution van. A tough-looking customer presents the penguins with a dilemma: they flash back to a moment where he produced a pin and blithely popped their inventory. But they face their fears, hand him a batch of balloons, and high-five (or high-fin) when the man walks away delighted.

Since we first had the pleasure of meeting Phil Pirrone and the Longhair Illuminati crew several months ago, we knew they were the real deal and we’ve been fans of Casket Salesmen ever since. Casket Salesmen is hitting the road NOW and we would love nothing more than to set you up with the opportunity to sit down with the band for a video interview when they are in your market, so don’t hesitate to be in touch. We’ve also got plenty of copies of Sleeping Giants on hand for all of your on-air giveaway needs. If you need more info, call Andy Gesner at 732-613-1779 or e-mail us at info@HIPVideoPromo.com. You can also visit Long Hair Illuminati to find out more about Casket Salesmen.