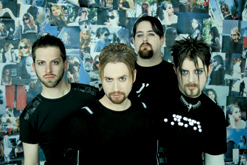 Greetings music video brethren! It’s Andy Gesner and the staff from HIP Video Promo bringing you a new video with plenty of bite. We’ve written before about how much we love it when a member of a band doubles as the group’s video director. It always seems to us that the resulting clip is playful, enjoyable to watch, and true to the spirit of the song. When the video is conceptualized by the group’s principal songwriter, the fit between lyrics, sound, and image invariably becomes even tighter. Danny Chaotic is the frontman and ideologue behind the Chaotica project, and his video for “When She Falls”, the lead single from Prison Of Decay, fits the track perfectly. It’s fast-paced, voyeuristic, confrontational, aggressive, and humorous, and its portrait of a decadent, media-drunk superstar feels instructively hyperbolic and all too current. Like so many disgusted by contemporary culture, Chaotica loves to watch the inevitable self-immolation and fall of those overnight celebrities; unlike others who are more squeamish about their schadenfreude, they’re not ashamed to say so

Nevertheless, if things continue the way they’ve been going for the group lately, the members of Chaotica are likely to have to contend with some celebrity of their own. Granted, it wouldn’t be of the overnight or undeserved variety: the industrial rock group has been putting out albums and playing shows since the late Nineties. But recently the underground has begun to recognize what Fort Wayne, Indiana already knows – the four members of Chaotica are budding stars. Certainly the members of the quartet look the part – as the “When She Falls” video demonstrates, the musicians in this act are kinetic, adrenaline-fueled, dramatic in performance, and commanding before the camera. Danny Chaotic is, in particular, the very picture of the modern rock frontman; big-voiced, edgy, and brash, he dominates the frantically-paced band footage in the “When She Falls” clip.

He also dominates the song. “When She Falls” is a scathing put-down of a media-fabricated “puppet-girl” celebrity and a de facto declaration of independence from the usual starmaker machinery. The musicians punctuate Danny Chaotic’s vitriol with rapid-fire machine beats, squalling lead guitar, hooky-abrasive synthesizer, and overdriven bass. In the “When She Falls” clip, Danny and Chaotic howl away in tight quarters: a tiny “stalker room” lined with photographs of a fictional fashion-television star. Danny Chaotic kicks hard against the claustrophobia generated by the setting – and in so doing, he lashes out at the confining elements of a culture dizzy with self-congratulatory gestures. We see the young woman in action, too: abusing her fans, her butler, and her cosmetologist, privileging her dog over other human beings, teasing the spectators on the runway, gabbing on her hot-pink cellphone, and drawing rapt attention for doing very little. A renegade paparazzi photographer (most likely the one who created the “stalker room”) gets into her bedroom at night and catches her at an inopportune moment; but besides that, she is in complete control of her surroundings. She’s a comic caricature, for sure, but she’s not too far removed from actual celebrities whose activities are closely followed by American television viewers. No wonder, then, that Danny Chaotic and his band react so fiercely to her monumental excess.

It is our great pleasure to work together with Dan Bush and the entire crew al Cold Fusion Records to bring you this hard hitting video. They’ve been kind enough to hook us up with all kinds of awesome Chaotica goodies including copies of Prison of Decay, Chaotica CD opener keychains, posters, t-shirts, and more! If you need more info, call Andy Gesner at 732-613-1779 or e-mail us at info@HIPVideoPromo.com. You can also visit
www.ColdFusionRecords.com, or www.ChaoticaMusic.com to find out more about Chaotica.