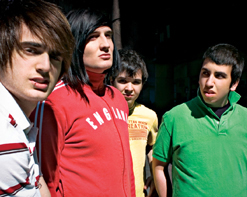 CUTE IS WHAT WE AIM FOR

Greetings to all my video programming cohorts! It’s Andy Gesner and the talented staff from HIP Video Promo, back with another clip from a new band banging on the door of national consciousness, demanding to be let in. Cute Is What We Aim For is a quintessential Fueled By Ramen act: energetic, tuneful, pop-smart, articulate, and, above all, young. But even before the Buffalo band signed to FBR, they’d already used Internet tools available to every band to make themselves a national underground sensation. PureVolume, MySpace, LiveJournal, YouTube; Cute Is What We Aim For put all of these services to work for them, and built a gigantic audience for themselves. To date, the quartet has racked up a stupefying four million plays on MySpace, and have had close to two million individual visits to their page. In 2005, only months after the band’s formation, the group won the PureVolume Battle Of The Bands, and secured a slot at that year’s Bamboozle. The Cute Is What We Aim For story ought to be an inspiration to all bands, and to everybody who believes in the power of digital media to connect artists with audiences.

So what’s all the buzz about? CIWWAF (as their fans call them) plays brash, infectious, and immediately identifiable pop-punk in a style made internationally famous by bands like Fall Out Boy. But while most of the groups working this territory keep a poker face on and don’t deviate far from well-worn subject matter, Cute Is What We Aim For frontman Shaant writes humorous couplets, witty asides, and self-aware examinations of what it means to be a disaffected teenager. He’s not angry, he’s wry – and his clever reflections have resonated for thousands of listeners.

The Same Old Blood Rush With A New Touch, which had the biggest selling first week for a debut record on Fueled By Ramen, is a consolidation of past successes and a bold step into the future. Produced by Matt Squire (Panic! At The Disco, Midtown), the album positions CIWWAF as full, if detached, participants in the contemporary pop-punk subculture. Squire’s mixes emphasize the songcraft, and clear space for Shaant’s stories and observations. “There’s A Class For This”, the latest CIWWAF single, is a prime example. “We keep ourselves a mystery/ but we provide the clues”, Shaant sings, tongue in cheek, to his audience, “so the rest is up to you.”

The clip for “There’s A Class For This” provides some of the clues, hinting at the reasons for the group’s popularity and the spirit that animates their ironic stance. This is a band that looks and behaves like its audience: four smart kids, a bit uncomfortable under the hot summer sun, out for a good time, but always with glances over their shoulders. The band is captured playing tennis, surfing, hanging out in the grass, and checking out girls at a tropical resort. If they look a little out of place, that’s part of the joke; if the ease with which they make themselves fit in through the sheer force of their enthusiasm is also apparent, that’s part of the point. The performance footage begins during the day, as Cute Is What We Aim For plugs in to portable generators in a touring van and rocks out in front of a brick wall. But by nightfall, they’re the main attraction, entertaining the beautiful people. They’ve taken this beach town by stealth and strategy.

We are completely thrilled to be working with John Janick and everyone at Fueled by Ramen on not one, but on three amazing videos from artists that will be sure to infiltrate everyone’s stereos and iPods this summer. CIWWAF will be on the road all summer long with fellow FBR mates Paramore, so be sure to be in contact with us about setting up video interviews when they come through your town. Rest assured that will also have plenty of copies of The Same Old Blood Rush With A New Touch available for any and all on-air giveaways. If you need more info, call Andy Gesner at 732-613-1779 or e-mail us at info@HIPVideoPromo.com. You can also visit www.FueledByRamen.com, or www.CuteIsWhatWeAimFor.com to find out more about this up and coming band.