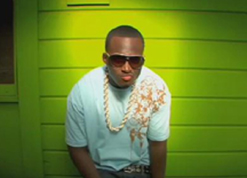 Hey, everybody, it’s Andy Gesner from HIP Video Promo, back with an irresistible video from a new artist poised to bust out of Northern California and into the national spotlight. For the past few years, the Bay Area has been the place to be for creative rappers of all ages. Whether you want to call it “hyphy” or something else, the Yay sound has been the most innovative and characteristic in hip-hop – one often described as steady as melting ice, its rhythm a slow, cool drip. Turf Talk, The A’z, Kafani, The Pack, Keak da Sneak, the legendary E-40, Mistah F.A.B., The Federation and Traxamillion: these Oakland artists have ignited a movement, and done so with style, flash, and good humor. But at the moment, nobody in the Bay Area is any hotter than Darren Williams – better known as D.Willz. On one level, his street burners and radio pop songs are the most perfect expressions yet of the freewheeling Northern California hip-hop spirit; on another, they’re so much more. His recordings are regional sensations, but they transcend all local limitations: they’re coming, and soon, to a neighborhood near you, no matter where you are.

If you spent any time in the Bay Area this summer, you probably already know “Licka Sto” (and “Purpz”, and “Skin Tight Jeans”, and the insanely-banging “Put It In The Middle”). These were the sound of the Oakland streets circa 2008: the songs you’d hear coming from the corner bodega, or blasting out of the windows of a passing car. They also hit the airwaves – local deejays have been inundated with requests for the tracks, and they’ve been catapulted into rotation on commercial radio by popular demand. D.Willz mixtapes have been the city’s hottest for months – and adding to the hysteria, the young emcee’s much-anticipated official release has finally dropped. Welcome To Willzvillecollects the singles that have made D.Willz a regional star, and adds brand-new material that expands and deepens the rapper’s outsized personality.

Many of the leading lights of the Bay Area rap scene and hyphy movement contribute verses to Welcome To Willzville: The A’z, Nio, San Quinn. But this is D.Willz’s show, and he makes the most of it. He’s a remarkably fluid and conversational rapper; he’s approachable, witty, and instantly identifiable, and his expressive performances dominate every cut on the album. He’s front and center in Mickey Finnegan’s amusing clip for “Licka Sto”, too. We watch the muscular emcee wake up, fumble with his alarm clock, and float down the halls of an opulent suburban home as if he’s standing on a conveyor belt. D.Willz seems to have everything a young rapper could want – everything, that is, except for a stylish pair of shoes. Luckily, the “licka sto” on Broadway is fully stocked with supplies, and when he gets there, it’s a full-on shopping spree. As you might imagine from this description, D.Willz is an emcee unafraid to poke fun at himself: he raps in front of the mirror while brushing his teeth, and the local paperboy (also played by Willz) mocks his worn-out kicks. Both the playfulness and exuberance are refreshing: it’s a slice of an attractively-presented life, bright, colorful, and instantly appealing.

We’re super excited that Mark Kragen and our friends at 2Fresh Entertainment are bringing us this impeccable video! Please reach out to us to secure a copy of Welcome To Willzville for all your on-air giveaway needs!If you need more info, call Andy Gesner at 732-613-1779 or e-mail us at info@HIPVideoPromo.com.