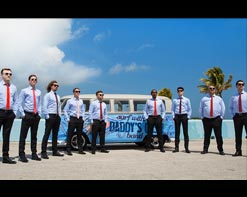 If you’re looking for a group who has almost single-handedly mastered the essence of funk, soul and R&B music and achieved both critical and commercial success in the process, look no further than Poland’s favorite nine-piece musical tsunami, Daddy’s Cash. In an age of digital recordings, backing tracks and studio tricks, this is a band that has established themselves in the most honest way, with an explosive live show and prolific output of gritty, jazz and soul infused studio recordings.

Daddy’s Cash, which began as a collaboration between a group of close friends, has grown into a much-acclaimed, internationally respected Jazz and Funk outfit that always ignite experimentation and improvisation through their high-energy musical arrangements. HIP Video Promo is excited to present their latest feel-good rave up and first single from their upcoming new album Hello, “This Is My Party.”

Founded in 2010 in the deepest outskirts of Southern Poland, Daddy’s Cash performs music that is rooted in genres of American Jazz, R&B, Soul, and Funk. This affable ensemble includes a wide range of instruments including a bulletproof brass section, guitars, keyboards, harmonica, and percussion. With great flexibility, Daddy’s Cash has a stunning repertoire that opens many unique avenues for expanding the band’s musical influences into new styles of compelling, intriguing grooves.

Since its early days, Daddy’s Cash hasn’t been limited to any one single style of music—many musical improvisations have been kindled by their joy of playing together. In 2012, they teamed up with American Blues legend John Lee Hooker, Jr. to record their debut album That’s What The Blues Is All About. The album won a Golden Record in Poland and officially kicked off the career of the band in their home country.

From their highly anticipated new album Hello comes “This Is My Party,” an explosive, ebullient single that gives us every reason to peg Daddy’s Cash as a band to keep an eye on in 2014. The video clip follows a tenacious young die-hard fan as she defeats guest lists, creepy bouncers and VIP stars to finally reach her desired goal; make it onstage with her favorite up and coming band. “This Is My Party” is a sure fire recipe for a fun-filled evening, bringing dancing and full force funky rhythms into the forefront. Daddy’s Cash has the hooks and the stylish musical savvy that sets them apart from their peers, including bands that have been on the playing field for decades.

Don’t miss any upcoming news and appearances by Daddy’s Cash! Be sure to contact Andy Gesner and the HIP Video Promo staff at (732)-613-1779 or email us at info@HIPVideoPromo.com . You can also visit www.DaddysCashBand.com/ for more info.