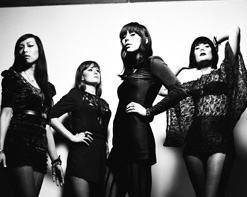 Equal parts girl-group gloss and brash punk energy, we’ve got another awesome video from the Dum Dum Girls coming your way programmers! It’s Andy Gesner and the HIP crew, here with a full serving of what some of you got to taste earlier this year with “He Gets Me High,” from the EP of the same name, produced by legendary producer Richard Gottehrer, co-founder of Sire Records and co-writer of 60s girl-group staples “My Boyfriend’s Back” and “I Want Candy.” Now the band swiftly returns with the release of their brand new full length Only in Dreams and the leading single “Bedroom Eyes.”

The Dum Dum Girls might be the baddest girls on the scene, always clad in black dresses and deep red lipstick, the all-girl quartet has built a massive following across the globe from listeners and critics alike. The band recently toured with Vampire Weekend, MGMT, The Vaselines, and the now widely respected Sub Pop label mates, Beach House. What makes Dum Dum Girls so satisfying is that they can hit those base pop pleasure centers in the back of any conscious record collector’s brain with its reverberating haze of guitar distortion, heart-thumping drumbeats, and head-turning vocals. NME recently placed the rockers as one of the featured “15 Bands To Get Excited About” on their cover, and they were right! The Dum Dum Girls are something to get excited about indeed, as Only in Dreams is a one hell of a sophomore record, winning over critics everywhere. Pitchfork recently raved that Dum Dum Girls sound like “a girl gang had kicked the authority figures out of the principal’s office, barricaded the doors, and taken to blasting their delinquent anthems,” giving the record a fantastic score, something not common with this publication for pop rock music! SPIN gave the album an 8 out of 10, stating that the Girls “draw inspiration from previous rock eras to mint something fresh ‘n’ fuzzy.” Rolling Stonewas so excited about this release, that they named Dum Dum Girls a “Band to Watch” after having heard a snippet of the record. The album has also caused a splendorous stir in major publications like The Washington Post, Filter, New York Times, LA Times, Vice UK, Paste and so many more.

This is the all-girl rock video your playlist has been yearning for this year, and if you liked what you’ve heard from Dum Dum Girls previously, you will absolutely adore “Bedroom Eyes.” We’ve got copies of Only in Dreams for you to get your hands on, so reach out for any requests. If you need more info, call Andy Gesner at 732-613-1779 or e-mail us at info@HIPVideoPromo.com . You can also visit www.SubPop.com or www.WeAreDumDumGirls.com to find out more about Dum Dum Girls and all the tour dates near you.

For info about Dum Dum Girls’ video, “He Gets Me High” click HERE