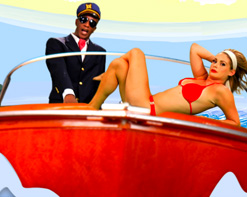 Greetings programmers! Andy Gesner and the staff from HIP Video Promo, here with a groovy track that will make you lose your cool and wear yourself out on the dance floor. Farrad is the fearless whirlwind force of the treacherous pop world. He blends musical styles like paint on a palette and has the image to match his grand ambitions. With his third single “The Way You Do,” Farrad is ready to get your knees bending and hips-a-twisting once again! This bright and sunny upbeat number is as sonically undeniable as it is visually awe worthy.

“The Way You Do” is effortlessly magnificent and truly grand in all expected Farrad fashion. The song features a neo-soul groove mixed with a fast and driving beat to make it easily stand out among the now all-too-common synthpop contenders in the dance music landscape. While Farrad is usually known for his complete fearlessness in the face of adversity, the track finds the singer stumbling and losing his suave over a prospective lover. Hey, it happens to the best of us! Despite what the lyrics indicate, Farrad is definitely as charming as ever on this latest entry, employing rapping and singing to deliver an array of hooks in punchy sequence. He has always been an artist that can easily navigate between dark big club bangers and bright upbeat pop songs. Up until this point we’ve only seen a small piece of what he is capable of delivering, and it is our intention to keep the surprises coming!

Of course, it wouldn’t be a Farrad video if it wasn’t as visually stunning as his tracks are infinitely catchy. “The Way You Do” is a hybrid animation piece in the manner of Rihanna’s “Rude Boy” or Taking Back Sunday’s “Liar” videos, where real life seamlessly blends with stylized cartoon fantasy in way that would give Pixar a run for their money! Director/animators Michael Goldberg & Matt Campbell from Your Favorite Entertainment laboriously pieced together the video over the course of several months, using everything from green screens to green suits, and models left and right. We’re not just talking about the people; the cars, boats and planes are models as well, and we find Farrad behind the wheel as a result of master camera work and editing. And when you get a moment, allow them to tell you how they managed to create the stunning “invisible dancer” look! The clip features numerous locations imagined in retro form, such as a diner setting filled with coordinated sultry female dancers. However, one of the most impressive creations in this diverse visual treat is a dance sequence that places Farrad as a leader of a pack of invisible dancers that synchronize moves with the singer while being completely deprived of a human body!

In the last year, Farrad has truly electrified pop music with his appearance on the club scene, with enough self-made accomplishments to give the majors a big run for their money. Farrad’s first single “Pick Your Face Up Off The Floor” was aBillboard “Breakout for Hot Dance Club Play.” The song inspired director Greg Haggart and Ann Gilbertson (producer of music videos and concert footage for acts such as The Rolling Stones, Michael & Janet Jackson, David Bowie and Nine Inch Nails) to collaborate on the accompanying video to realize Farrad’s post-apocalyptic vision of man vs. machine. The video was featured on the MTV Logo show Pop Lab and was featured the network’s The Click List, for 12 weeks in the top 10. Farrad’s second video for the subsequent single “Misunderstood” was directed by internationally recognized director and the visionary behind Big Art Group, Caden Manson and debuted as a #1 choice on MTV Logo’s Pop Lab. The song was also licensed by Abercrombie & Fitch and Banana Republic for national retail play.

Tracks from Farrad’s album, The Time Is Now, were featured by 9 shows on MTV, E! and Oxygen, including The Real World,Road Rules, Extreme Challenge & The Stylist, Keeping Up With The Kardashians & Kourtney and Khloe Go To Miami, andBad Girls Club. The public praise of approval doesn’t stop there as magazines and websites are buzzing with support for Farrad. For example, InStyle Magazine boldly declared that “Farrad is the future of the hot club scene.” Internet music website Scope Magazine also joined in by stating that “Farrad always delivers a take-no-prisoners attitude.” Farrad, being a live performer from head to toe, extended his reach onto the global stage, performing all over the United States, major European markets, and in Australia. He also most recently appeared at New York City Fashion Week and Pridefest. It has certainly been a big year for this multi-faceted talent.

We are very excited to bring you the latest work from the Farrad team. We’ve got copies of The Time Is Now for you to enjoy and for your on-air giveaways so don’t be shy about requesting copies! If you need more info, call Andy Gesner at 732-613-1779 or e-mail us at info@HIPVideoPromo.com. You can also visit www.Farrad.com to find out more about Farrad.

For info about Farrad’s video, “Pick Your Face Up Off The Floor” click HERE