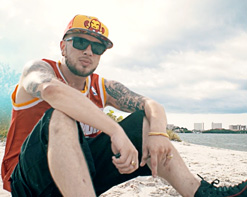 Five Drexler is a Florida native ready to take the Rap game (industry?) by storm. His eclectic taste allows him to create hook-laden Rap hits time after time, constantly leaving fans wanting more. His two 2017 singles, “You Are Mine” and “Smokers Section (Where It At)”, are taking his (is taking his)influence to the next level with elevated songwriting and one liners that are impossible not to quote incessantly. (continuously)

The story of Five Drexler is that of a Hollywood drama. After a night of partying in the city of St. Petersburg, Florida. Drexler fell asleep in the backseat of the car when he and his crew were heading home. Drexler was awakened to the sound of screeching brakes and burning rubber when their car collided with another, killing multiple passengers in a gruesome and disturbing turn of events. This fateful night changed the rapper’s life forever.

In the wake of tragedy, Drexler made the decision to utilize his grief as fuel. After the accident, he began producing and started writing again. He decided to band together with other artists sharing similar ideals and (that were) striving for the same goal. With the help of Dangeruss and General Lee, The Treblemakers became the (budded) flower sprouting from the dark soil of his past. With newfound strength in numbers, The Treblemakers have enriched their individual and collective content to a world-class level.

In his own words, “You Are Mine” is a “twisted modern love story”. A man showing his feelings to a woman who is never there for him in return. With music and lyrics created by Five Drexler and the official video produced by David Rollins (Five Drexler) and Richard Usher from Treblemakers Studios,(.) this release is an(a) true show of force by the Treblemakers team. The “Smokers Section (Where It At)” video, just released in September,(and) is proving to be the perfect way to ride the new hype. The official video for this song follows Five Drexler on a mystical journey to track down his true love: The endlessly elusive Weed Fairy. The undeniable beauty of the fairy takes him to another plane of existence where the only truth is that he must follow her to the “Smokers Section”. Lucky for him, she knows “where it at”.

It’s a true honor and profound privilege to welcome Five Drexler into the fold here at HIP Video Promo and we’re ecstatic to share these two new videos with you and your viewers. Please don’t be shy about getting in touch to let us know what we can do on our end to secure these videos the programming exposure they deserve. Please contact Andy Gesner and the HIP Video Promo team at (732)-613-1779, email us at info@HIPVideoPromo.com or visit www.Facebook.com/FiveDrexler for more info on Five Drexler.