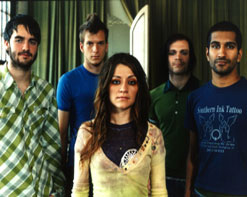 Hello friends and fellow music lovers! It’s Andy Gesner and the staff from HIP Video Promo, here with an engaging clip from a repeat client in the midst of making a giant step from the underground to the mainstream. Who’s to say a heavy rock band can’t have chart singles? Paramore recently put that maxim in its coffin, and now Flyleaf has arrived to hammer in the nails. “All Around Me”, the latest single from the Belton, TX band, reached #6 on the Modern Rock charts, and has even crossed over to select pop playlists. It’s a testament to the band’s powerful and provocative sound – and to the unmistakable talent of frontwoman Lacey Mosley.

Mosley isn’t a typical pop star – but maybe she ought to be. Few heavy rock singers can rage with such intensity and yet remain vulnerable and approachable. She’s also been blessed with a monumental and versatile set of pipes. Mosley has a voice powerful enough to compete with the earth-shattering Flyleaf guitar attack – yet when she needs to drop her volume and deliver an intimate confession, she’s every bit as effective as she is when she’s roaring. Her writing, too, is both brutally honest and immediately sympathetic, and young fans across America have found themselves identifying with her candid stories, each one delivered with the passion and courage of a soul-baring love letter.

“All Around Me” is one of her most powerful missives. It is, superficially, a tale of surrender to a lover – but on closer inspection, the song is a deeply spiritual statement. The narrator is craving a connection with the divine, and when she finds it, she’s flooded with vitality. The other members of Flyleaf support their frontwoman with music worthy of the supernatural: dramatic half-time drums, rock-solid bass, and a titanic wall of distorted six-string. No wonder, then, that “All Around Me” has become a staple of the band’s celebrated live set.

Paul Fedor is the perfect director to animate Lacey Mosley’s visions – he’s worked with Marilyn Manson, P.O.D., and 30 Seconds To Mars, so he knows a fair bit about that infrequently-visited intersection between the secular and the divine. His is a dark vision, but there’s something redemptive about it, too. The Parsons-educated Fedor is a painter and illustrator as well as a videomaker, and like many directors who straddle the divide between commercial and fine arts, he’s interested in pushing boundaries. He also, apparently, has a storehouse full of paint. The “All Around Me” clip finds Flyleaf performing in an entirely white room – even their clothing, musical instruments, and amplifiers are bright white. Mosley alone wears a grey dress; barefoot, she dances across the floor in a kind of reverie. This scene holds until the heavy guitars kick in – then, colored paint begins to pour in streams from the top of the wall. The first rush is bright red, but other hues follow, and by the time the song has reached its chorus, the room is stained like an artist’s easel. The paint coats the clothing of the bandmembers; it sprays onto Mosley’s dress; and before the clip is done, Flyleaf has become a live-action canvas, themselves a chaotic, vibrant work of art.

We are very excited to once again be working with the folks at A&M/Octone to bring you this exquisite new video. They have been kind enough to hook us up with copies of Flyleaf  for all of your on-air giveaway needs and desires, so please be in touch if you’d like a few copies. Flyleaf is a band that has lived on the road for the past two years, so even though there are no tour dates listed at the moment, it’s very possible that new dates will spring up at any moment. This means, of course, that we can set you up with a video interview if they come to your market. If you need more info, call Andy Gesner at 732-613-1779 or e-mail us at info@HIPVideoPromo.com. You can also visit www.AMOctone.com or www.FlyleafMusic.com to find out more about Flyleaf.