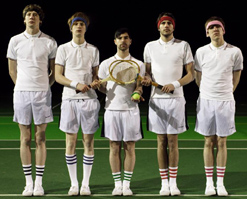 Hello my indie rock kindred spirits! It’s Andy Gesner and the staff from HIP Video Promo. Over the past few years, we’ve noticed something both remarkable and (to us) pleasing: independent bands have begun to incorporate choreographed routines into their videos. Consider the success of the “1,2,3,4” clip as a telling example – after years of arch disavowal from indie purists, dancing has become fashionable again. There are many reasons for this, including increased hipster acceptance of beat music, the visionary styles of contemporary video directors, and the undeniable spectacle of synchronized dancers. But the simple explanation is that independent music is much groovier than it used to be. Art-punk – especially British art-punk – has become genuinely funky again. And few art-punk bands are anywhere near as danceable as Oxford’s propulsive Foals.

The promo clip for “Balloons” features dancing, and lots of it: from the musicians in the band and from a chorus line of attractive, bobbed-haired young women in black flapper regalia. But this is no slick Janet Jackson spot – director Dave Ma has incorporated plenty of edgy, nervy weirdness into the video. Start with the Foals themselves: their actions are choppy, precise, machine-like. Even while performing, they hang their heads over their instruments, and shake as if animated by electrical jolts. The girls dance more gracefully, but their moves are similarly sudden and unsettling. By the end of the clip, they’ve surrounded the band on the set, and they all gyrate together: a mass of motion, chaotic, but oddly ritualized.

That’s a good description of the music that this quartet makes, too. Foals are at once the most radical and the most approachable of the new British dance-punk bands. Their radicalism comes from their deep understanding of avant-garde art movements and the virtues of minimalism – but they derive their approachability from their pop-smarts and their irresistible grooves. The spiky single-note guitar patterns, burbling synthesizer, odd song structures, and Yannis Philippakis’s rhythmic yelp are all arresting; paired with Foals’s crisp and precise rhythm section, they become a whirlwind of sound, one more infectious and booty-shaking than any indie band has a right to be.

Produced in part by Dave Sitek of TV On The Radio, Antidotes, the Foals debut, arrives on these shores in March. The band has already hit the U.K. top 40 with “Balloons”; their hyperkinetic stage show (coming to NYC and Seattle in the next few weeks) seems to assure the band an enthusiastic stateside reception. While we’re waiting for the quartet to arrive, we’ve got Dave Ma’s weird, hypnotic video to play and re-play. The band performs in a well-lit living room; behind them, someone paints an arcane symbol on the homey wallpaper. The flappers aren’t the only ones they’re sharing the space with, either – a very cooperative crow lands on the musicians’ shoulders, and pecks seeds from out of a pomegranate. Later, Yannis Philippakis clutches handfuls of fire; continuing the twisted-domestic theme, the group clusters around a burning kitchen table. Meanwhile, the girls dance around them, oblivious to it all, making strange, fluttering hand symbols in the direction of the camera. Ma freezes and fidgets with the footage of the performers, rendering their movements even choppier than the choreography does. It’s destabilizing, perplexing, confusing – and it might just make you get up and dance.

Foals’ clip for “Balloons” is another video amongst the long line of quality vids brought to you courtesy of Lacey Swain and Megan Jasper at Sub Pop Records in early 2008! If you’d like to get your hands on a copy of their forthcoming record,Antidotes, for contests on on air-giveaways, be sure it hit us up in March when they hit shelves, and we’ll set you up. If you need more info call Andy Gesner at 732-613-1779, or email
info@HIPVideoPromo.com. You can also visit www.SubPop.com or www.WeAreFoals.com to find out more about Foals.