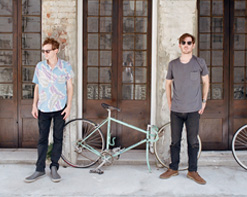 Generationals are staying true to their name by honoring a generation of synth-heavy 80’s pop in their new single, “Catahoula Man”. This song marks the fifth single released by the band in 2017 alone, teasing fans ‘till their next fix of indie-pop gold.

The band states that the inspiration for “Catahoula Man” stems from early American-Modernist painter, Stuart Davis, who is most notably known for his jazz-influenced, proto-pop art paintings of the 1940’s and 50’s. Davis saw endless struggle behind the scenes of his colorful art, and the band took note of the way he continued to create such poppy art despite his depressive states. This inspiration is evident to fans of the band, thanks to the world of primary and pastel colors created by director and animator Micah Gardner in the video for this song.

Generationals’ last album, Alix, put them on a relentless touring schedule for the better part of two years. With “Catahoula Man” at the forefront of a five-single release schedule since the beginning of the year, the band is gearing up to feed their road-dog mentality. You can currently catch them on the road during their last string of dates with Benjamin Jones from Vancouver, down the west coast U.S., just in time for Halloween.

We are absolutely elated to be teaming up with Polyvinyl and Generationals to bring you the “Catahoula Man” music video, and see it included in your regular programming. Don’t hesitate to let us know what we can do on our end to make that happen. Please contact Andy Gesner and the HIP Video Promo team at (732)-613-1779, email us at info@HIPVideoPromo.com. You can also visit www.Generationals.com or www.PolyvinylRecords.com for more info on Generationals.

For info about other Generationals music videos, click HERE