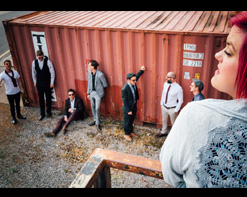 No, maybe you haven’t heard of this group yet.  But if you’ve paid attention to popular music in 2017, you ought to recognize “Late Nights & Heartbreak” from the moment you press play: it’s the soulful, stirring, Grammy nominated track that provides the backdrop for the centerpiece of Jay-Z’s most recent album.

“4:44” — perhaps the most direct and confessional in the rapper’s catalog — is a late-night, searching testimonial.  But as great as the emcee is, it wouldn’t cut anywhere near as deep as it does without the searing music that supports the verse. You’d be forgiven if you mistook it for a lost gem from the late-sixties heyday of soul. But it isn’t an old record at all. “Late Nights & Heartbreak” was recorded recently by Hannah Williams & the Affirmations, a powerhouse R&B outfit from Bristol in the U.K., released a small independent label Record Kicks, discovered by hit-making producer No I.D., and sent to Jay-Z to prompt an artistically fruitful sleepless night of heartfelt introspection and passionate confessional writing. No I.D. recognized: only a stone could hear Williams’s performance on “Late Nights” and not be moved. The song not only inspired Jay-Z to do some of his best work, but to also circumvent the traditional channels of managers, labels, etc. and pick up the phone and call Hannah himself to relay his desire to bring their worlds together. What will it inspire you to do?

“Late Nights” is indeed a remarkable recording. Yet it’s only part of the Hannah Williams & The Affirmations story. The other twelve songs on the Late Nights & Heartbreak album share the intensity and authenticity of the one that’s become world-famous. The band has retained one of the most visionary producers in the U.K. to help capture its sound – Malcolm Catto, a man who gets the most out of idiosyncratic and uncompromising acts. He did it with the jazz renegades in Yussef Kamaal and he didi as well with Ethiopian Jazz Legend Mulatu Astatke, Floating Points, Quantic, Dj Shadow and Madlib. He’s done it again here with a classic, horn-spiked funk and soul act.  The nine members of the Affirmations are totally committed to soul at its purest; from their arrangements to Hannah Williams’s fiery lead vocals to that crisp James Brown-style crack of the snare drum, everything here is perfectly realized, smart, tough, timeless. Blessed by the late lamented Sharon Jones the story of Hannah Williams seems to be written in lore from day one. Her father was a musically gifted minister and her mother let her join the church choir at the age of 6. Hannah could read music before she could properly read words.

Hannah Williams is a powerful screen presence, too, and she dominates Nick Donnelly’s clip for “Late Nights & Heartbreak”. This is a story about love, inadequacy, and the search for artistic perfection, and she brings it to life onscreen just as she does in the studio. Her “force of nature” voice, combined with the band’s stellar musicianship, make this remarkable musical phenomenon impossible not to root for. Prepare to be overwhelmed: Jay-Z and No I.D. sure were. Now it’s your turn.