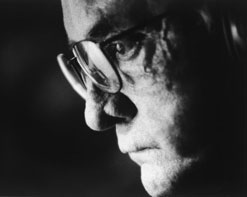 When it comes to the reigning, proudest moment for the HIP crew, getting the opportunity to promote Johnny Cash’s “Hurt” video back in 2003 is one of the top contenders. Promoting “God’s Gonna Cut You Down” – which featured celebrities like Bono, Johnny Depp and Jay-Z mouthing off the lyrics and digging deep for their inner Johnny Cash – three years later was another highlight. And now, we’re beyond thrilled to have another all-important video honoring the Man in Black. This comes courtesy of The Johnny Cash Project, who have put together a haunting video to go along with the song “Ain’t No Grave.”

Johnny Cash as one of the most influential musicians of the 20th century needs little to no introduction. The Johnny Cash Project set out to visualize this, and as a global art collective project, they wanted to show how he lives on not just with his music legacy but through the lives of those he continues to touch. This is done through a growing number of participants who use a single image as a template to create a unique personal portrait in sharing their vision of the late singer-songwriter as he lives on in their minds. The result is a vast collection of one-of-a-kind portraits laced together to create the “video” for Johnny Cash’s “Ain’t No Grave.”

What you see are these black and white drawings essentially coming to life, such as the images of Johnny Cash walking through a tunnel with his signature acoustic guitar hanging from his back. Similar to the song, you notice almost immediately the underlying themes of mortality, resurrection and everlasting life as images of Johnny Cash meandering a graveyard with the words “What Would Johnny Cash Do?” and “Salvation Lies Within” flash onto the screen. This is what the Johnny Cash Project aimed to pay tribute to, in addition to reflecting how prevalent he still is in people’s lives.

“Ain’t No Grave” is, of course, off of Johnny Cash’s last posthumous album, American VI: Ain’t No Grave, which was released earlier this year. It was his third posthumous top-10 album in the U.S., having peaked at No. 3 on the Billboard 200 and No. 2 on Billboard’s Top Country Albums. The album is also his final one from his “American” series of career-defining recordings. Regarding the album, Billboard truly said it best: “Some guys just know the right way to say goodbye. Johnny Cash couldn’t have known exactly when he’d be exiting the mortal coil (he died in 2003), but the Man in Black had just buried his wife, June Carter Cash, and was in poor health as he recorded the last batch of his American Recordings series with producer Rick Rubin. The 10 tracks on American VI: Ain’t No Grave are drenched in mortality, but Cash stares it full in the face without any audible fear, declaring, ‘Ain’t no grave gonna hold my body down.’”

It’s admirable and inspiring to see the Johnny Cash Project do the late singer great visual justice with his song “Ain’t No Grave.” We’re honored to be a part of spreading the word on this collective art project, which is a unique testament to Johnny Cash’s ever-growing presence today. If you need more info, call Andy Gesner at 732-613-1779 or e-mail us atinfo@HIPVideoPromo.com . You can also visit www.TheJohnnyCashProject.com and www.LostHighwayRecords.com to get more info on Johnny Cash and the Johnny Cash Project.