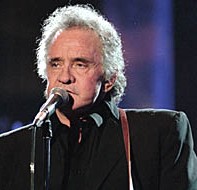 Hey everyone! It’s Andy Gesner and the staff from Hip Video checking in with more great videos to tell you about…Two big announcements! The first is our new website is HIPVideoPromo.com and we would love it if you visited and signed our mailing list. The second is that we have signed on with artist friendly Lost Highway Records and have the distinguished honor of promoting the powerful new video from Johnny Cash.

The terms “legend,” “giant” and “icon” are thrown around pretty loosely these days — millions of people are tuning in every week to watch a truckload of wannabes pretend to be some kind of “idol.” When all glitter and hype blows aside, however, still standing like a weathered and gnarled ponderosa pine; silver-haired now but still clad in trademark black — there stands Johnny Cash.

It’s impossible to imagine American music without Johnny Cash. No performer over the last 45 years has had nearly as wide a range of influence across such a broad musical spectrum. As one small example, over one hundred different acts have recorded covers of just ONE of his songs (“I Walk The Line”). Still, Cash has never been one to rest on his laurels or allow his vision or his craft to stagnate. In the new video “Hurt,” he takes what would appear to be an unlikely song, written by Trent Reznor of Nine Inch Nails, and makes it unmistakably and unforgettably his own. “Hurt” is bittersweet but never bitter, heart-rending but never pathetic. It’s a brutally honest look back over a long and eventful life and career. The sepia-toned cinematography is an obvious but effective link to the past, but “Hurt” is no rose-colored vision of some mythical bygone “good old days.”

Director Mark Romanek (who, interestingly, has also worked with Nine Inch Nails) artfully intercuts scenes from the past, including a much-younger Cash on stage and some Cash family home movies. Most powerful, though, as the song builds to its musical and emotional climax, are the brief clips from Cash’s own feature film, Gospel Road. The performance is shot in the dust and disarray of the now-closed Cash museum contrasting framed photographs with a smashed gold album. Cash comes off bloodied but unconquered, wisened but wiser, grieving but steadfast. “Hurt” shows Cash for what he is, the heroic but undiminished “eminence gris” of American music. There is pathos woven into every frame of this video, but to feel pity is unthinkable. The inevitable emotional reaction is what Cash richly deserves, our undying respect.

For more info on this remarkable clip call Andy Gesner at HIP Video. His number is 732-613-1779 and e-mailinfo@HIPVideoPromo.com . He will make sure your Johnny Cash needs are fulfilled. We are going for adds in CVC on February 21st and February 24th.