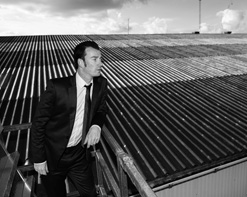 The multi-instrumentalist Scandinavian mastermind behind sugar-sweet hits like “Reckless” and “Spell On You” is back with a dual personality. That’s right, not one, but TWO new smash singles to double your fix of Laust Sonne. Between the eccentric guitar-led club favorite “On The Radio” and the emotional soft-pop ballad “Sunday Morning”, this match made in heaven gives fans both sides of the renaissance man of pop, and offer accessibility to potential new fans all across the globe.

Fans likely know Laust Sonne best as the drummer for the iconic Danish band D-A-D (Disneyland After Dark). The band has been a staple on the rock circuit with their over the top live shows, infectious energy, and lighthearted approach to songwriting. Laust himself is known to kill with crowds, specifically being perched atop a 30 foot high hydraulic drum riser. But in the spirit of artists like Phil Collins and Dave Grohl, his songwriting chops were just too strong to keep him confined behind the drums and he stepped out from the back and to the front of the stage. And as a solo artist, this enigmatic music maker has become impossible not to root for.

“On The Radio” chimes in with an impressively percussive yet melodic guitar progression before being stormed by a low-end thump when the thick electronic bass kicks in. The verse hangs off a cliff with the line, “You have moved on and our love has disappeared”, echoing to fill the space as the listener awaits a payoff in the chorus. Laust Sonne delivers that chorus like an electronic orchestra, with layers of synth lines, vocal harmonies and a full-time beat, making it impossible to avoid dancing on impact. The lyrics detail the jealousy and nostalgia Sonne feels once his heart is broken by a former love. He would do anything to re-live the highs of his past relationship, like dancing to their favorite songs on the radio. The video takes place in a bustling city. Even with life happening all around him, he can’t help but think about his lost relationship. These deeply nostalgic feelings are depicted via vintage-looking flashbacks weaving in and out of the entirety of the video.

“Sunday Morning” is Laust Sonne’s soft introspective tale of wanting someone more than they want you. The push and pull of romance, where love trumps lust, but the feeling isn’t mutual. One person has their heart dragged along while the other gets exactly what they need. “I’m nothing but a brick in the wall, I’m nothing but a trick you can call in, I’m just your fix on an early Sunday morning.” Laust sings this chorus with utter apathy, from the position of the one who caught feelings. This video romanticizes Sonne’s muse, her beauty shining through the screen. She lives freely, going out and dancing while he is chained to his phone, unable to stop thinking about her. Finally, at the end of the night, she shows up to his door, on her own accord of course, and charms her way into his arms, where the cycle begins all over again.

This masterful pop gem showcases the incredible intellect in songwriting, composition, and performance, Laust Sonne can nail any style he’d like and we hope that viewers all over the globe can appreciate his knack for creating modern pop with heart! Please let us know what we can do to get the “On The Radio” and “Sunday Morning” music videos into your programming. For more information please contact Andy Gesner and the HIP Video Promo team at (732)-613-1779 or email us at info@HIPVideoPromo.com or visit www.LaustSonne.net for more info on Laust Sonne.

For info about other Laust Sonne music videos, click HERE