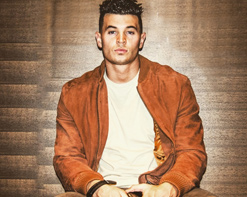 A few things that are often most associated with Seattle are rainy, cloudy days and understated, introverted indie rockers with little knack for musical fanfare. Today we are introducing you to Luce, an artist and song that will cause many viewers to rethink everything they thought they knew about the Emerald City! “New Mercedes” is the first single from M U Z M | S Z N, Luce’s debut EP on Create&BeReal Records. We’ve already got the Luce bug, and we encourage you to jump headfirst into the new video and join the club.

The tropical combination of his father being of Samoan descent and a native of Hawaii combined with Luce’s time spent at the University of Hawaii has helped inspire an extensive arsenal of diverse skills. Luce’s m.o. is a unique ability to connect soothing vocals with rich lyrics through well-crafted beats and an energetic flow, creating a consummate elegance reflective of Luce’s true identity, island roots and musical creativity.

Using the Seattle skyline and nightlife as the backdrop, the “New Mercedes” video is one that will surely get us all fired up.
There’s no brooding grunge rockers here, just an ambitious young baller unafraid to shine a light on the finer things in life. There’s fast cars, beautiful women, palatial estates, and round after round of shots from the top shelf. This is life as it should be, with Luce seizing the chance to live it the fullest “like Russ Wilson in the 2-0.”

Huge kudos to Luce, as well as his partner in crime and Create&BeReal Records cofounder, Lux, for bringing us such a thrilling clip to immerse ourselves in. Please get in touch with us here at HIP Video Promo to let us know what we can do to get “New Mercedes” into your programming! You can call Andy Gesner and the HIP Video Promo team at (732)-613-1779, email us at info@HIPVideoPromo.com. You can also visit www.LuceOfficial.com for more info on Luce.