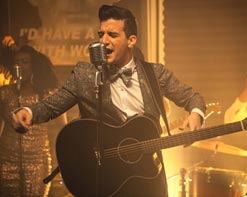 To millions of Americans, Mark Ballas is already a household name. As a professional ballroom dancer on ABC’s Dancing With The Stars, Ballas has danced his way into the hearts of viewers with an impressive list of celebrity partners. His talents, however, extend well beyond the dance floor. This young, handsome, Texas native, is also a singer, songwriter, and recording artist with one solo album–2011’s HurtLoveBox–already under his belt. But with just one listen to his tremendous new single “Get My Name”, it’s clear that Ballas is about to move more people to dance than ever before. From the moment its funky R&B groove hits, this song sounds like a smash hit, and the video for “Get My Name”–directed by Emmy-award winning choreographer Derek Hough, who is also Ballas’ close friend and DWTS castmate, –is an irresistible blast of fun, sexy energy that will make you a believer. HIP Video Promo is proud to present the spectacular clip for Mark Ballas’s “Get My Name.”

Filmed on location at the Sayers Club–an ultra-hip Hollywood venue where Ballas currently has a residency–the video prominently features the club’s modern classic feel which fits “Get My Name” perfectly. The song itself is rooted in the sounds of classic R&B and soul, but the production is definitively modern, making it easily stand up against any contemporary pop song. Behind the mic, Ballas’s tenor is smooth and sexy with lots of flavor and falsetto, delivering the song’s infectious hook directly into your pleasure center.

The video begins with Ballas and his crew rolling up to the club where they first inspect a lineup of gorgeous women looking to get inside. After he grants them his overwhelming approval, the camera takes us inside the club where the party is already in high gear. The champagne is flowing, the crowd is dancing, and Ballas is commanding the room from center stage, his natural charisma creating an enormous star presence. Along the way, he flirts with many stunning women and treats us to some extremely impressive choreography in the song’s instrumental break to remind us that Mark Ballas is the whole package. By the video’s end, however, this is quite obvious. The world is his for the taking.

Fresh off the world premiere on both MTV Hits and mtvU and topping the Twitter trending charts in the process, “Get My Name” is ready to explode into your video programming! As always we are here to do anything at all to get this video into your programming, so don’t be shy! For more information on Mark Ballas and the clip for “Get My Name,” please contact Andy Gesner and the HIP Video Promo Staff at (732) 613-1779 or e-mail us at info@HIPVideoPromo.com /a>. You can also visit www.MarkBallas.com for more info.