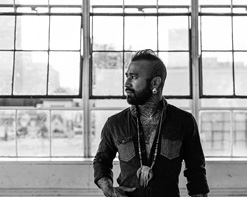 Musicians often paint their songs with existential questions like “why am I here?” and “who am I?” While most are painfully derivative, every once in awhile there is someone whose life has truly been shaped by this need to know. For Oregon-born artist Nahko, the search began as a child. When Nahko was born in 1986, his mother was 15 years old. She was forced to give him up for adoption due to circumstance and he was raised by a privileged white family. Being that he is made up of Apache, Puerto Rican, and Filipino blood, deep questions burdened him from a very young age. His new single, “Dragonfly” tells the story of his journey leaving home at the age of 18 in search of answers.

When he turned 18, Nahko ventured to Alaska. While there, he fell madly in love for the first time in his life. He and his love travelled all the way down the west coast and across the country to Louisiana by way of a very long road trip. They lived in a house together for 4 months. Surviving that first year away from home was a major inspiration for “Dragonfly”.

After residing on an organic farm in Hawaii for a while after that, Nahko returned home to Oregon, still needing answers to questions about his past. He searched the web for information on his birth mother, and shockingly enough, she lived but 15 minutes away from him. The artist details the experience himself,  “I drove there and, there she was, my mom,” he says. “My two sisters, their kids, my two brothers… everyone. Mom was crying. I was crying. The first thing she asked was ‘What do you do?’ I shrugged and said, ‘I play music.’ It literally happened like that — all by divine intervention. I picked up, left Hawaii, and came home to not so randomly discover my mom lived basically down the street from where I grew up.” A truly astonishing development in the young life of Nahko, all by the age of 21.

My Name Is Bear is Nahko’s first solo effort in the world of music after his relentless work spreading positivity with his band, Nahko and Medicine For The People. An aptly titled solo album, “Nahko” means “Bear”, a name that was given to him by a friend during his time in Hawaii. The album serves as a prequel to the Medicine For The People records, detailing the specific time of soul-searching the artist took on from the age of 18-21.

The thought-provoking music video for “Dragonfly” features 19 year-old actress and model, Paris Jackson, also no stranger to non-traditional childhoods. A friend of Nahko’s, she radiates the essence of the song in the most fluid performance imaginable with motions that mimic that of a flower in bloom, making the viewer feel warm, while wanting to dig deeper into the longing in her eyes. Jackson translates perfectly, the artist’s declaration of standing strong in the path of truth when facing the cruelties of blossoming into a man. In a world where a dark cloud rains corruption unto the minds of the innocent, the essence of this song is needed more than ever, to aid us in finding our own answers to the questions that burden us.

It is a pleasure to be able to work with the Nahko team to help get the word out about this exceptional talent and his captivating story. Please contact Andy Gesner and the HIP Video Promo team to find out more and to let us know what we can do to get this into your programming. Call (732) 613-1779 or email us at info@HIPVideoPromo.com. You can also visit www.SideOneDummy.com or www.Nahko.com for more info on Nahko.