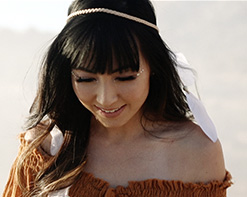 In an age where fake news and superficial facades run rampant through media circuits, authenticity is a valuable resource. Wielding an all-organic force-of-nature voice, an effortless knack for songwriting, and crystal clear honesty, Natalise + The Sunset Run are a diamond in the rough of emerging cultural icons. The wonderfully crafted, fully realized new music video for “In The Fall” is the group’s next step in bringing visceral raw talent back into the limelight of pop culture.

Natalise was noticeably special from the beginning. As young as three years old, she began playing piano, awakening her musical ear. After beginning dance lessons at seven and joining the choir at eight, she trained as a classical pianist and vocalist at the renowned San Francisco Conservatory of Music. Following her training, Natalise + The Sunset Run were welcomed into the scene with instant success. The band landed songs on commercial radio stations across the country, secured placements on networks like MTV, VH1, Oxygen and The WB/CW, and performed at household name venues like The Arena at Oakland, Viper Room, Hotel Cafe, and House of Blues. No matter the platform, the band’s authenticity has shone through radio waves, TV screens and live environments with the same all-encompassing purity each time.

“In The Fall” comes as the second single off the group’s 2017 Constellations EP. The first single entitled, “Be” was an uplifting anthem, declaring “All you gotta do is BE – you and you and nobody else.” The new single takes on a more personal perspective as Natalise opens up about unexpectedly getting swept off her feet. Her ethereal vocals detail how she was in a dark place for so long, being pushed and pulled by the bleak reality around her. At her darkest point, she was saved by love as it “crashed into her world.” As the pumping kick and snare build the tune, the budding star soars through the chorus exclaiming, “In the fall I found it all, through the dark I saw the dawn; in the fall I found it all, and you knew it all along.”

The vibrant music video serves as the perfect visual representation for the redemptive nature of “In The Fall.” It follows Natalise and her beau on a wanderlust-esque journey as reality melts around them… because the only thing that matters is the love they’ve found in each other. Serene images of sprawling mountains and vast deserts juxtaposed with intimate moments remind us what it feels like to fall in love.

We’re profoundly thrilled to share the raw and real talent of Natalise + The Sunset Run to bring you the “In The Fall” music video. It’s our sincere hope that you and your viewers will embrace “In The Fall,” share it on your socials, and add it to your programming in a timely fashion. Rest assured we will have plenty of outstanding Natalise merch to set up online/on-air contests and giveaways throughout the campaign. Don’t hesitate to let us know what we can do to help you spread the music magic of Natalise + The Sunset Run. Please contact Andy Gesner and the HIP Video Promo team at (732)-613-1779, email us at info@HIPVideoPromo.com. You can also visit www.NataliseMusic.com for more info on Natalise + the Sunset Run.

For info about other Natalise + the Sunset Run videos, click HERE