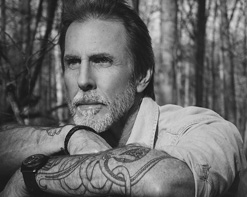 If there’s one thing that Nashville loves, it’s a tale of perseverance. So it’s no wonder that RJ Comer is, in his fifth decade, becoming a sensation in Music City and beyond.  It took the Chicago-born, oaken-voiced singer-songwriter a good long time to get the attention he’s currently enjoying – years of sweating it out in small clubs, working as hard as he can to share his songs and stories with as many people as possible. His diligence has been rewarded: he’s lately been featured at South By Southwest, the Canadian Music Festival, the Third Street Songwriters Festival in Baton Rouge and at other celebrations of musical excellence, and he’s toured in support of A.J. Croce and Steve Forbert.  Now, with the accomplished One Last Kiss, he’s poised to ascend to stardom of his own.

He’s earned it. “All Over Again”, his latest single, is all about the quotidian challenge: the daily struggle for self-esteem, recognition, and, yeah, a couple of dollars, too.  Comer makes sure this sturdy country-rock ballad is gripping from the get-go – whether he’s angling for a few more minutes under the covers before the sun dawns or turning a skeptical eye on a tightwad boss, he’s immediately identifiable. His reasons for his labors are manifest, too – he’s doing it all for his wife and family.  Throughout, he’s eminently believable: his voice is heavy with the authority of lived experience, and it’s clear, sure, and welcoming as a flame in a dark room.

The single builds on the success of Nightly Suicide, his candid 2016 EP, and “House Grown Cold”, a single lauded by PopMatters for the frankness of its tale of heartache. Bill Filipiak’s stark, beautiful black and white clip for “House Grown Cold” caught Comer out in the cold of the deep Tennessee woods that he calls home.  For the “All Over Again” clip, he’s once again working with Filipiak – an experienced video director who has shot clips for Lee Ann Womack, Sarah Jarosz, Darius Rucker, the Steep Canyon Rangers, and other country and Americana favorites – and while they’re still surrounded by trees, the tone of their newest collaboration is far warmer.

Here, we’re introduced to Comer the husband and hardworking lumber-cutter, sawing through trees (under the burdensome supervision of a boss played by Filipiak) and returning home to make dinner for his wife. In the kitchen, in his pickup, on his knees in the forest – he looks comfortable and natural wherever he goes.  But he never seems quite as content as he does when he’s strumming his acoustic guitar under the bright Tennessee sky.

As a seasoned artist who has earned praise from notable names in the industry and a songwriter that’s impossible not to root for, RJ Comer is no stranger to making music that captivates listeners. It’s our sincere hope that you and your viewers will embrace the “All Over Again” music video, share it on your socials, and add it to your programming in a timely fashion. Rest assured we will have plenty of outstanding RJ Comer merch to set up online/on-air contests and giveaways throughout the campaign so don’t hesitate to let us know what we can do to help you spread the musical magic of RJ Comer. Please contact Andy Gesner and the HIP Video Promo team at (732)-613-1779, email us at info@HIPVideoPromo.com. You can also visit www.RJComer.com for more info on RJ Comer.