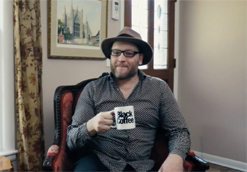 Rob Higginbotham and the Mysterious Undertones

Blues, classical, jazz, vintage rhythm and blues, country picking, or rock and roll – Rob Higginbotham can do it all. He’s a marvel on the acoustic six-string in any style you’d choose, and he’s never more relaxed, magnetic, and mesmerizing than he is when he’s playing his own witty songs. A guitarist of Higginbotham’s skill can always count on plenty of work in a place like Nashville, and plenty of work requires plenty of black coffee.

Yes, Higginbotham’s beverage of choice is the strong stuff – straight from the bean without milk or cream. He’s got some observations to make about coffee and its effect on him, and though he knows it hops him up and makes him crazy, he’ll never go easy on it. “Black Coffee”, a funky acoustic blues song that showcases Higginbotham’s playful side, is the concluding track on Rob Higginbotham And The Mysterious Undertones. The EP is a multifaceted collection that contains plenty of winning melodies alongside all the stinging riffs, and it has won Higginbotham an audience well beyond the Nashville city limits.

To make the video for “Black Coffee”, Higginbotham has connected with a director as mischievous as he is. Texas filmmaker Brad Ballew is a master of motion graphics and Adobe video editing, and he puts his talents on display in a clever clip that presents Higginbotham as a coffee-fueled, domestic superhero. This isn’t the first time the guitarist and the filmmaker have worked together: Ballew, who has also shot clips for The Rumba Madre, Madeleine Benson, Quinn O’Donnell, and other formidable guitarists, caught Higginbotham and his band in action in the black and white spot for the jazzy “Get Right Back”.

There’s plenty of guitar in the “Black Coffee” video, too, but there’s nothing straightforward about what these guys are showing us. We’re welcomed into a house crammed full of Rob Higginbothams: sometimes as many as six replicas of the singer in a single shot. Higginbotham pours coffee into the mug of another Higginbotham, who clinks cups with a Higginbotham on his left… and if your head isn’t spinning by the end of the first verse, well, maybe you haven’t had your coffee yet. It’s a perfect visual metaphor for the way a strong cup of coffee in the morning can make a man feel like he can do it all, and it’s no coincidence that before Higginbotham takes his solo, he takes a sip.

Here at HIP Video Promo we’re delighted to partner with Rob Higginbotham to champion his musical savvy and his debut music video for “Black Coffee”! It would make our day to see this video added to your cherished programming and online presentations, so please check it out in a timely fashion. Rest assured we’ll have some terrific Rob Higginbotham merch for you to utilize during the campaign, so if you’d like to get your hands on some, we’re here for you. For more information on Rob Higginbotham, please contact Andy Gesner and the HIP Video Promo team at (732)-613-1779 or info@HIPVideoPromo.com. You can also check out www.RobHigginbotham.com for more info on Rob Higginbotham.