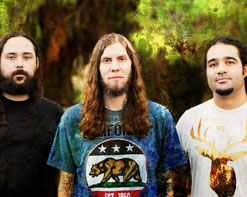 The mid-tempo, dirgy hard rock style of Smile Empty Soul is one of the most unique sounds in the hard rock world. Since the release of their self-titled debut in 2003 the band has put out release after release of hard-hitting, ever-evolving tunes that push their own limits, always with maximum reward. Countless days on the road have also turned the band into one of the most finely tuned musical machines both on record and on stage.

After years of being held up in the proverbial red tape of the music industry, the band has finally been able to give the fans what they want in the way of their new EP, Shapeshifter (out 4/1 on Pavement Entertainment). In an effort to reward their fans’ patience and change things up a bit, they’ve reached back into their past, re-recording 3 of their biggest singles from their debut (“Bottom of a Bottle,” “Nowhere Kids,” and “Silhouettes”), giving a new spin to these favorites. Of course, there is new music on there as well (along with a DVD stuffed full of behind-the-scenes content) perhaps the most memorable being the new single for “All In My Head.”

In the video, the band treats us to an inside look at the creative process behind not just the recording of “All In My Head,” but also the other ways that they find their creative vein. Intermittently throughout the video each member approaches a table, paintbrush in hand. Slowly a collaborative creation starts to form before our eyes. It’s a cool, and unique look into the creative process of a band whose sound and approach is as unique as any on the hard rock landscape.

It’s always a pleasure to work with the Pavement Entertainment crew to bring you the best in the modern hard rock and metal scene, and they continue to carry that torch with authority. We are here to get you whatever you may need to support Smile Empty Soul, so please don’t hesitate to get in touch with us here at HIP Video Promo. You can reach us at (732)-613-1779 or email us at info@HIPVideoPromo.com . You can also visit http://www.SmileEmptySoul.com/ and http://www.PavementMusic.com/ .