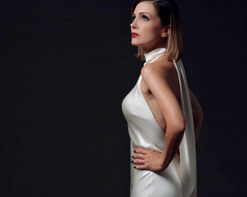 V. Contreras is a world class singer, reborn. She is a woman who has traversed the world of music, enlightening people with her profound gift. She has seen heaven and hell in the world of entertainment, coming from humble beginnings and taking her turn at the golden gates. Lucky for us here at HIP Video Promo, she has lived to tell the tale. Her brand new single “Like It’s Yesterday” is the introductory passage to send the beautiful soul of V. Contreras into the hearts of billions around the world.

V. Contreras was raised just outside the Northwestern city of Seattle, Washington. From a young age, music was an important part of her life. Her mother was a classically trained singer so she was constantly exposing V. to a wonderland of rhythm and melody. They had a lot of family in Idaho, so road trips were a regular activity for the Contreras family, especially when the holidays rolled around. These long drives brought about endless sing-alongs and musical games which served as a true place of comfort for the young Contreras. Her parents took these trips as an opportunity to introduce her to a variety of artists such as Sarah Vaughan, Karen Carpenter and Linda Ronstadt.  She speaks often of hearing Patsy Cline’s “Sweet Dreams” for the first time and how when she fell in love with music and the way that music made her feel during those 4 minutes. At the age of 10, she began following in her mother’s footsteps by taking voice lessons from Maestro David Kyle (Liza Minnelli, Anne Wilson of Heart and Lane Staley of Alice in Chains.). Throughout her teens she took influence from these various in developing her style and grace as a vocalist. Seattle proved too small a pond for her as she skipped town as soon as she could.

At the age of 19, V. Contreras spread her wings and flew head-first into the City of Angels, Los Angeles, California to pursue her passion of being a singer. While there, she joined an R&B group that garnered a lot of attention thanks to working with the likes of Randy Jackson in the group’s early stages. Although the group didn’t last, V. went on to live in LA for a total of five years before her decision to return home to Seattle and pursue a solo career.

In her own words, she is an “artist who writes better with cloudy skies”, a sentiment that shines through in the sound of her new single, “Like It’s Yesterday”. The song was inspired by rather somber subject matter, especially in the chorus. The chorus details an older man gradually being bullied by Alzheimer’s, but from the perspective of his wife, realizing that her husband’s mind is slowly crumbling. Complimented by timeless string arrangements by Andrew Joslyn (Macklemore, Ke$sha) and tasteful production by Martin Feveyear (Brandi Carlile, Duff McKagan’s Loaded) The deep nostalgia and disheartening helpleness in the words and lyrics are guaranteed to hit listeners in the feels, especially with the chilling voice of V. Contreras belting the tale.

We are absolutely ecstatic to be teaming up with an artist brimming with heart and soul like V. Contreras, to bring you the “Like It’s Yesterday” music video, and see it included in your regular programming. Don’t hesitate to let us know what we can do on our end to make that happen. Please contact Andy Gesner and the HIP Video Promo team at (732)-613-1779, email us at info@HIPVideoPromo.com or visit www.MusicOfV.com for more info on V. Contreras.