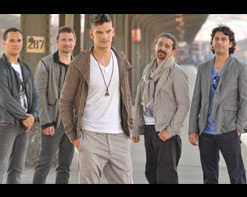 Through its epic live shows and soaring songwriting, VAMA has helped rebels and dreamers like find their escape. This Romanian quintet has been a staple on the scene for nearly a decade, and though their name is still new to many American viewers they are poised to make a big impact in 2017. With a style reminiscent of artists like Coldplay, Kings of Leon, and The Killers, they’re a natural fit in venues as large as stadiums or as intimate as a living room. For their new single, “GHOSTS AT WAR,” they flex this musical muscle with impressive power.

On top of being a musical fixture in Romania, VAMA lead singer Tudor Chirilia is also recognized as one of the most preeminent young cultural leaders in Romania. Aside from being a well known actor and producer of events, he has been tirelessly traveling the country to connect with the youth of the country and foster a culture of mentorship for high school students. His time directly engaging fans in such a benevolent fashion has helped him create songs that have an uncanny knack for speaking directly to each and every listener.

The uncanny accuracy in “GHOSTS OF WAR” of what a long-term relationship can feel like is something that so many viewers can relate to. It shows a couple leading a seemingly benign existence in their lovely home, disinterested in most everything around them. Their expressions are empty and the emotion gone, but one look below the surface a different kind of passion exists. Whether it be smashing the coveted iPad with a hammer, dropping the pearl necklace in the blender, or just simply screaming until they’re hoarse in each other’s face, there’s a tension that needs a release. Afterwards, however, a beautiful thing happens when they redirect that energy into the love they have for one another, creating a fleeting intimate moment that may just be enough to keep them together.

Throughout the video, VAMA is rocking out in the background and dropping a heartfelt soundtrack of their winning blend of pop songwriting and rock n roll performance prowess. It’s this kind of approach and realization that has made VAMA one of the most beloved groups on the European continent and a worthy selection from the hundreds of applications from our friends at Music Gateway. For more information please contact Andy Gesner and the HIP Video Promo team at (732)-613-1779, email info@HIPVideoPromo.com. You can also visit www.VamaMusic.ro or www.Facebook.com/VamaMusic for more info on Vama.