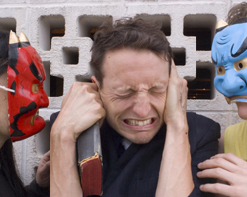 Huge hellos to my friends nationwide! It’s Andy Gesner and the staff from HIP Video Promo. On grey days when all of indie rock seems to speak in the same polite, measured voice, we can thank the heavens for 31Knots. The Portland trio has been blazing their own trail for more than a decade – refining their utterly singular blend of oddball new wave, math-rock, avant-garde music, DC hardcore, Tom Waits-style instrumental arrangements, and folk-orchestral prog – and the world is starting to take notice. Yet as strange as they get (and make no mistake, they do get strange) there’s a hookiness and fearlessness about their music that makes the band compelling to commercial rock listeners and experimentalists alike. Perhaps it’s because they’re so proud to put their marks of distinction on display that so many mainstream music fans have begun to stand up and salute 31Knots: their boldness is its own advertisement for the group’s many virtues

Consider, for instance, the bizarre – but fascinating – clip for “Beauty”, the lead track from The Days And Nights Of Everything Anywhere. In it, singer Joe Haege is shown dressing up to go out on the town with bassist Jay Winebrenner. Sounds like a simple and straightforward premise, right? But in the hands of directors Morgen Dye (Two Ton Boa, the Gossip) and Jane Paik (aka indie choreographer Janet Pants), it becomes an exercise in creative delirium. Haege has an angular and striking face, and he and the directors do what they can to augment its severity: he’s filmed spit-combing his hair and dragging down his eyelids, pointing his chin at the camera as he shaves, and drinking from a bottle of cologne. Even in the performance footage – shot inside a cluttered old house – Haege is made to look sweaty and agitated, accompanying his address to the audience with a battery of inscrutable looks.

But the “Beauty” clip doesn’t really tip into madness until Haege begins applying makeup. When he runs the lipstick in a crude circle around his mouth, you might think that he’s simply dressing up like a girl – but then he’s smearing chalk and greasepaint over his cheeks, licking his lips, and painting wild streaks across his eyebrows. When Haege finishes, his face is obscured behind a mask of swirling white and crimson cosmetics. It isn’t mime-like or clown-like – it’s simply insane, and singular, and needs to be seen to be understood. Haege and Winebrenner hit the streets in that state, and as the bassist stands around with studied indie-rock cool, the guitarist and singer plays peek-a-boo with the camera, suddenly popping up with a grimace before disappearing from the frame.

The wigged-out clip suits the song perfectly. “Beauty” is a runaway combustion of distorted percussion, piano, strange bursts of noise, snarling six-string, and Haege’s demented wail. It’s the kickoff track on The Days And Nights Of Everything Anywhere, an album that’s already getting hailed as 31Knots’ masterpiece. The band is currently taking their incendiary stage set to Europe, but will be back in the states by summer; by then, it’s our best bet that everybody in indie rock nation (and quite a few expatriates) will be very familiar with 31Knots.

Sincere and countless thanks to Matt Lunsford and Seth Hubbard at Polyvinyl Records for bringing the HIP crew on board once again to champion this deserving video! We’ve got copies of the 31Knots album, The Days And Nights Of Everything Anywhere on hand, and we trust that you’ll reach out to us to score some for a contest or giveaway at your outlet! If you need more info, call Andy Gesner at 732-613-1779 or e-mail us at info@HIPVideoPromo.com. You can also visit www.PolyvinylRecords.com to find out more about 31Knots.