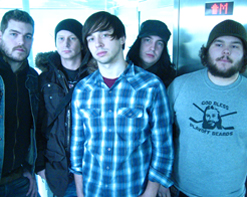 Greetings fellow music fanatics! It’s Andy Gesner and the tireless staff from HIP Video Promo, here to share a collaboration between an exciting new indie band and one of our favorite video directors. Now, we’ve all seen “corridor” clips – videos in which the action takes place in a long hallway. Some of the most famous pop clips in history were shot in this manner: either there’d be a stationary shot and the vocalist would address the static lens, or the camera would chase the musicians along the passage. But we reckon you’ve never seen a corridor clip quite as haunting as the one Justin Staggs (NOFX, Against Me!, Strike Anywhere) has made for Pennsylvania’s A Farewell Rescue. And after you’ve seen it, you’ll never look at other artists’s corridor clips in the same way again.

For starters, this is no blinged-out passageway he’s slotted the band into: the walls of the corridor appear to be draped with black plastic trash-wrap. It buckles and bunches in places, and reflects eerie fluorescent light from hanging lamps. The members of A Farewell Rescue slide backward along this corridor at disorienting speed – they stand still, yet appear to be moving away from the camera. Or perhaps it’s the hallway that’s moving? It’s hard to tell, and Staggs and the band leave it purposefully ambiguous. Their aim is to evoke speed, dislocation, an unsettled emotional state, a locus of uncertainty, giddy bewilderment, and dizziness.

Those same feelings of destabilization are conjured throughout Never Meet Your Heroes, A Farewell Rescue’s bracing debut album. The Central Pennsylvania quintet plays immediate, catchy pop-punk – but there’s a real dark side to this band, too. The lyric to “Pretty, Cut & Dry”, the energetic first single, turns on the double meaning of the word “operator”: is the narrator patching through a call to his girlfriend, or is he talking her through some kind of arcane surgery? Expressive lead vocalist Joey Farewell yelps about “detention cells in resort hotels”; elsewhere, his imagery is just as apocalyptic. The band backs him up with thunderous, squalling pop-punk, razor-sharp and frequently menacing in its intensity.

As they’ve proven in clubs all over the United States recently, A Farewell Rescue is a fantastic live act – and Staggs gives each individual bandmember a chance to strut his stuff in the “Pretty, Cut & Dry” clip. Each gets plenty of camera-time, trapped on the conveyor belt in the corridor, hurling their song at the chasing camera. But this is a narrative clip, and one that follows the dream-like logic of the song. It opens with an image of an attractive young woman before the plate-glass windows of a department store. Behind the panel stands a mannequin – the picture of perfect feminine impassivity – under a sign reading “Are You Happy”? Clearly unable to answer in the affirmative, the woman consents to undergo a radical and depersonalizing operation. In a creepy-bright waiting room, she attempts to sign away her rights with a voucher, only to have her pen explode on the contract in a burst of violent red. A terrified moment later, she’s strapped to a gurney; and rough hands wheel her along that same chilling corridor in which A Farewell Rescue is performing. The surgeons succeed in converting her to mannequin, but they can’t rid her of her melancholy. As he did in his clips for The Soviettes and Love In October, Staggs shows himself to be a master of the moody backdrop, lighting every set for maximum visceral impact. But he never fails to make the band look terrific: commanding, authoritative ringmasters at a dark circus of the heart.

We’re really excited to be working with Kristan Harris and the crew at Snapdragon Records to bring you this most excellent new rock video. Luckily for you, they’ve set us up with lots of copies of Never Meet Your Heroes for all of your on-air giveaway needs, so don’t hesitate to be in touch if you’d like to get your hands on some. You can pretty much count on this band to be on the road constantly, so if you’d like to catch up with them for a video interview, we’ll make it happen. If you need more info, call Andy Gesner at 732-613-1779 or email us at info@HIPVideoPromo.com.