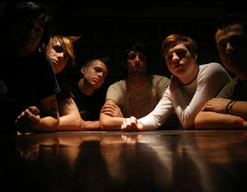 Best wishes to all of my esteemed music video colleagues! It’s Andy Gesner and the staff from HIP Video Promo, back with a crisply-shot performance clip from a young band with an explosive stage show and a sound to match. Long Beach, California hasn’t always been considered a terrific punk rock town, but over the years, those boardwalks and boulevards have spawned a fantastic group of enterprising independent musicians. Sublime, Snoop Dogg, War, and Zach De La Rocha may not have all that much in common, but they all called Long Beach home, and they all had the temerity to make their own breaks. Well, add modern rockers A Heartwell Ending to that list. You can find the Southern Californian quintet onstage most every night, winning over audiences to their incendiary post-punk sound. Their hunger is matched only by their intensity – and both have distinguished them from their peers.

They’ve also got a clutch of extremely catchy songs. Trust Us We Lie, the group’s debut, is reminiscent of Fall Out Boy and Taking Back Sunday in its immediacy, emotional honesty, and bracing melodicism. The band’s guitar attack isn’t always piledriver-relentless, but when they decide to crank up the wattage, they’re as fierce as any contemporary group. The six-string assault has been honed at countless shows with similarly urgent bands, including dates with I Am Ghost, As Cities Burn, and Bleeding Through. Beginning on September 1, they’ll be touring the country from coast to coast, and playing at some of the nation’s best indie rock stages – but also on radio stations, at street fairs, and even in churches. Status, packaging, and frippery don’t matter to these guys: what’s important is the message, and getting the music to the fans.

“If Looks Could Kill”, the lead single from A Heartwell Ending, is an Internet favorite and a prime example of the sort of power the band can generate. It opens with a purr, but soon explodes into full-volume verses before crashing in to the sort of chorus that ends up on the standalone MySpace players of countless lovelorn teenagers. The lyrics are direct, forthright, and heartfelt, the musicianship is superb, and the hook is simply undeniable.

To shoot their debut video, A Heartwell Ending enlisted one of the genre’s kings to their cause: Drive-Thru Records’ in-house director Scott Culver. Culver has translated to videotape the fury and passion of too many modern rock bands to name, but we’ll go ahead and name some anyway – Yellowcard, Hello Goodbye, The Early November, Over It, The Sound Of Animals Fighting. His understanding of what makes A Heartwell Ending so exciting is apparent: he brings them out as a ferocious live act, hurling their music at the camera with abandon. But they’re artful, too, and so is the clip. Culver plays with color throughout, highlighting the rings around the drums in bright green while everything else is bathed in olive drab. Once the band moves to the roof of a factory, he floods the shots with white light, and lets the chromatic value of his frames mutate. Colors change and blur, and through it all, A Heartwell Ending continues to blaze away, roaring their dissatisfaction and disappointment to the city below.

We are psyched to be working with Baron Bodnar and all of the good people at Mediaskare Records. A Heartwell Ending will be touring throughout the fall and we’d be happy to help set up video interviews and on-air giveaways of the new albumTrust Us We Lie, so don’t hesitate to be in touch. If you need more info, call Andy Gesner at 732-613-1779 or email us at info@HIPVideoPromo.com.