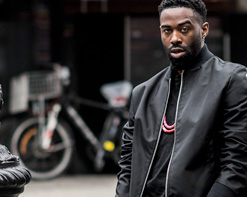 All through 2016, the new music kept coming. There was the propulsive, visionary “Guns And Roses”, the exquisite soul songwriting of “Sunset”, the near-ethereal groove of “Hypnotizing”, and several other irresistible tracks released straight to the Internet by the liquid-voiced Aaron Camper. Each song fanned the flames of anticipation for the next – and never did the Maryland-born artist let his fans down. It was one of the year’s extraordinary winning streaks, and it firmly established Aaron Camper as one of the most compelling independent voices in contemporary R&B.

But though the name might be new to you (and to thousands of listeners who’ve picked up on Camper through the successful campaign of Internet singles), the voice probably isn’t. Camper is young, but he’s no showbiz newcomer: in addition to his extensive work as a studio session singer, he’s honed his formidable skills as a touring support singer with Justin Timberlake, Chris Brown, Jill Scott, and JoJo. He’s learned from every one of the artists he’s collaborated with, and incorporated elements from mainstream pop, alternative rap, funk-rock, classic soul, and gospel into his own fearless songwriting. The result? The same sort of boundary-pushing, musically erudite, grown-up R&B that made Maxwell a superstar twenty years ago.

Blow, Camper’s latest album, collects the 2016 tracks and adds several electrifying new songs. “Know You Better” is Camper at his toughest and most seductive, purring a come-on over a slinky beat equally indebted to hip-hop and island music. His effortless transitions between velvet-voiced sung choruses and rapped verses marks Camper as an East Coast answer to Anderson.Paak.

With his close-cropped beard, designer shades, trademark hand-rolled cigarette, and impeccable fashion sense, Aaron Camper looks every bit the part of the modern R&B star. His videogenic appearance is on bold display in the audacious clip for “Know You Better”: Camper and his friends attend a sophisticated party at a mansion in the countryside, but they’re not just there to appreciate the aesthetics of the greenhouse. The singer has his eye on a girl who isn’t his – yet – and he’s determined to win her over at all costs. A tough guy is standing in his way, though, and this opponent isn’t shy about getting violent and causing a scene. But when the smoke clears (cleverly, also the name of the video directors!) the girl is where she was always destined to be: in the singer’s arms.

It’s a pleasure for us to have the chance to be a part of the Aaron Camper team! We’re very confident that programmers and viewers alike will gravitate towards this video like we have, and get it into programming across the board. We’re here to help make that happen, so please don’t be shy about letting us know what we can do to help! For more information, please contact Andy Gesner and the HIP Video Promo team at (732)-613-1779, email us at info@HIPVideoPromo.com. You can also visit www.Twitter.com/AaronCamper for more info on Aaron Camper.