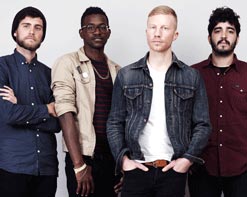 What began as a creative music experiment in 2011, Ace Reporter has evolved into a full throttle musical exposition of stellar songwriting and an exceptional sonic presentation. HIP Video Promo is pleased to introduce their exciting new video clip “Untouched and Arrived.”

This Chicago-based indie-rock band has divulged the contemporary music scene with memorable hooks and charismatic live performances. In 2010, songwriter, composer, vocalist, and multi-instrumentalist Chris Snyder embarked on what he called the Threesixfive project: each day came with a mandate for him to start and finish a new track. With motivation and drive, four EPs emerged and eventually transformed into a full-length album.

Yearling XL, Ace Reporter’s full-length, was recorded in a converted barn in upstate New York in the spring of 2011. Self-produced by Snyder himself, the album was engineered and mixed by Chris Grainger, known for his work with Wilco and Switchfoot. Filled with an array of vast emotion, the album is gathered from experiences and inspirations that propelled lead singer Chris Snyder throughout his year of magical thinking.

One of Ooh La La Records’ finest bands known to date, Ace Reporter delivers mightily with their astonishing new video for “Untoched and Arrived.” The video was directed by the vastly talented Elliott Sellers, who was the man behind the camera for some of our other favorites including Good Old War “Amazing Eyes” and others. The video is a cinematic exploration of the wonder and imagine of youth as we follow a young boy in his day to day life of discovery of the world around him. A common theme of birds and objects floating through the air in slow motion give the video an almost surreal feel as we share in the child’s determination to fly high himself. Snyder strongly holds down the performance side while on the roof a tall city building with flocks of birds swarming around him, but it is the young boy who is the emotional backbone of this video.

After coming off a run of SOLD OUT dates with the ever-popular Scottish band The Fratellis, Ace Reporter is ready to woe and weave audiences across the nation. We’re here to do whatever we can to get this video into your programming, so please don’t hesitate to get in touch! For more information on this exciting new band and their new video “Untouched and Arrived,” please contact Andy Gesner and the HIP Video Promo staff at (732)-613-1779 or email us at info@HIPVideoPromo.com. You can also visit www.OohLaLaRecordings.com for more info.