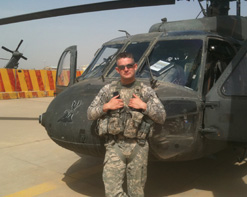 It’s time to stand at full attention, programmers! It’s Andy Gesner here with the HIP crew to bring you a wild ride on fully decked out UH-60 Blackhawk military helicopter, piloted by the singer of this next clip. Adrian Manuel is a musically gifted helicopter pilot who recorded his “Freedom” music video while piloting one of the world’s most dangerous weapons across the treacherous deserts of Iraq for your consumption and pleasure.

Adrian Manuel is not only a talented singer songwriter, but a defender of our freedom. Stationed thousands of miles from home and family, Adrian turned to the one outlet that satisfies the soul and follows you into the heat of battle to keep you strong – rock and roll. While isolated from the safety of the familiar and in control of one of our nation’s most vicious war machines, the UH-60 Blackhawk helicopter, Adrian penned a number of tracks that capture the spirit of his position. Adrian then convinced his commanding officers to allow us a glance inside what it’s like to pilot one of these birds of fire for the video setting of his stand-out track “Freedom.” The song sports fearless vocals in combination with a leading piano riff, a driving beat, and good ol’ distorted guitars in the choruses channeling classic country and rock influences.

What started out as a way to express his inner calling, became a national sensation after Adrian’s songs were noticed by music powerhouse GI Jams, a music network dedicated to our GIs at home and around the world. Started by Denny Randell and Biddy Schippers, both hugely successful songwriters, Randell having penned hits including ‘Let’s Hang On’, ‘Working My Way Back To You’, ‘Native New Yorker’ and ‘Can’t Get Enough Of You Baby’, which sold more than 200 million records worldwide, with three songs featured in the smash hit musical Jersey Boys and Randell & Schippers having scored a major video and a number of national dance hits and performed on the 2009 Jerry Lewis MDA Telethon. GI Jams aims to give back to our troops by releasing their music into the mainstream. GI Jams recently teamed up with EMI, which allows talented military musicians the opportunity to have their songs featured in movies, shows, commercials, and video games. GI Jams has been featured by international media including Reuters, CNBC, MSNBC,Forbes, and Military Times since its launch, and has received support from the likes of Senator John McCain who visited with Randell and Schippers at a homecoming event for several of its artists returning from active duty in Iraq. Las Vegas Mayor Oscar Goodman recently proclaimed May 20 as “GI Jams Day” in the city.

“Freedom” is one of the leading tracks featured on the album GI Jams Vol. 1, which we’d love to hook you up with, for your consumption and fan giveaways. For more info, call Andy Gesner at 732-613-1779 or e-mail us at info@HIPVideoPromo.com. You can also visit www.GIJams.com to find out more about Adrian Manuel and GI Jams.