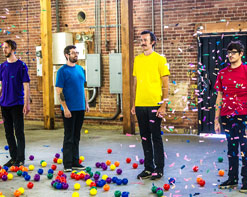 For their sixth album, garbagepop veterans AJJ chose to reinforce their strengths and leave any limp frivolities behind. They reconvened with producer John Congleton, who oversaw 2014’s sonically expansive Christmas Island, but recorded and mixed the album in a mere nine days, having arranged most of the songs during tour sound checks and downtime in the van. This made for a confident stride into more elaborate arrangements and wider dynamics while staying just as dour. They also opted, amid some sensation, for the simplified band acronym (previously Andrew Jackson Jihad). Singer Sean Bonnette told The AV Club that, among many reasons, the change cleared a space for new imagery and allowed their music to define them, not their band name.

As a result, their new album, The Bible 2, is their most ambitious and assured collection of scuzzy punk screeds, employing even more production heft while sparing none of the vulnerability. The album’s mantra is placed right at the center: “No More Shame, No More Fear, No More Dread”. The Bible 2 finds the band choosing intimacy over isolation, gravity over the vacuum, the stage instead of the scene. The album is also an examination of boyhood from an adult distance, putting some of its tumult and pain to rest.

Another cleansing of sort comes in the form of the first single, “Goodbye, Oh Goodbye.” The jangly throb is a cathartic fever dream, the band walloping furious chords, a kissoff to so many things worth shedding: the emotional heap of a past life, some long aching baggage, any and all expectations. For the coinciding video, Bonnette & co. decided to take another leap of faith and tackle a single shot music video. With no room for error, these clips are often simple in appearance but intricate works of art in execution.

The best single shot videos are the ones that look effortless because it illustrates how much work and preparation went into making the clip. Over the course of three brisk minutes the band pulls off synchronized dance moves in their complimentary primary colored shirts, as a variety of characters and props make their way across the screen, each one adding their small contribution to move the clip along. The band’s deadpan expressions can’t hide the fun they’re having, with their irreverent execution front and center.

It’s the candid ending that really reveals how much hard work was put into planning and executing this video. When the music stops and the last bits of confetti are hitting the ground a voice off camera announces “That was the one!” and the room erupts in euphoric celebration with the band and crew conglomerating together in celebration of their hard work.

We’re incredibly excited to have the chance to work with AJJ once again, one of our favorites on the SideOneDummy Records roster. The band is embarking on a huge US tour and we would love to get you out to see the band live. Please contact Andy Gesner and the HIP Video Promo team at (732)-613-1779, email us at info@HIPVideoPromo.com. You can also visit www.SideOneDummy.com or www.AJJTheBand.com for more info on AJJ.

For info about other AJJ music videos, click HERE