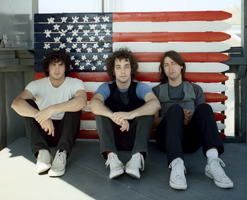 Howdy friends! It’s Andy Gesner and the staff from HIP Video Promo coming at you with another must-see video from NYC favorite!.You know him, no doubt, as the rhythm guitar player from The Strokes: that curly-haired, sharply-dressed presence at Julian Casablancas’s right hand. But it turns out that Albert Hammond, Jr. is an outstanding writer, too – and Yours To Keep, his first solo record, is a showcase for his talents. Devoted fans already know a few of Hammond’s songs – a version of the sprightly “In Transit”, for instance, was first made public on the band’s 2001 tour video – and they’re well-acquainted with his succinct, percussive, and economical guitar style. On his own, Hammond expands on his work with the group, crafting a set that’s warmer and poppier than anything his famous band has yet attempted. He even stretches out a bit more as a guitarist – just a bit. Everything he does is strictly in service of the tight, communicative songcraft..

Though Hammond, Jr. has toured the world with The Strokes and become an international superstar, those of us from the New York City metro area have always considered him a local artist. Such were the conditions of their early fame: we remember the rise to prominence in the Manhattan club scene, the hysteria that greeted the first demo recordings, and the camaraderie with other area musicians. The liner notes for Yours To Keep shows that Hammond’s heart is still in the NYC underground – the album features guest performances from Gothamite rock royalty such as Ben Kweller, Jody Porter from Fountains Of Wayne, and Sammy James of Mooney Suzuki. Casablancas himself shows up to add bass on one track, Steve Schiltz of Longwave plays guitar in Hammond’s touring band; even Strokes manager Ryan Gentles (an old friend of HIP Video Promo!) makes a cameo appearance on the album! Thin Lizard Dawn frontman Greg Lattimer produced the set at Electric Ladyland, right in the heart of the metropolis.

Hammond and his group have already played dates with Incubus, and will be touring the states with The Mooney Suzuki and Bloc Party this spring (as well as an appearance on Late Night With Conan O’Brien on April 4th). Yours To Keep is slated for a March 6 stateside release, but it’s been out in Europe for a few months – and fans and record reviewers have already given it an enthusiastic thumbs-up. Hammond’s solo set has earned him praise in Pitchfork, Rolling Stone, and theAllMusic Guide; and critics have agreed that Yours To Keep establishes the guitarist as a legitimate indie rock frontman and a song-smith to be reckoned with.

Many of the songs on the album are definitive works of art with garage-revival toughness with Revolver-esque melodies and arrangements. “101”, the lead single, is jaunty and infectious – and it turns out Hammond is a terrific, conversational singer, too. Sean Lennon’s piano gives the track some extra bounce, and his backing vocals add sweetness to an already irresistible melody. Yet there’s a sense of ruefulness that haunts the corners of this mix, and video director Patrick Daughters (Yeah Yeah Yeahs, Secret Machines, Death Cab For Cutie) captures that sadness and longing in his clip for “101”. The video opens with Hammond’s death: he’s been run over, killed in a bicycle accident. His ghost gets up from the crash scene and walks home, back to his flat where his bandmates are playing his song. But Hammond can’t communicate with his mates, or touch any of his instruments – his hand passes straight through his guitar. He manages to re-animate his body, but it’s no use: an arm and a leg fall off as he’s walking home. Hopping back to his flat, he can’t cope with the stairs leading up to the door. Hammond ends up face down on the concrete, his song still playing from the bay windows fronting the street.

Once again, we are thrilled to be working with Kevin Kertes and all of the crew at New Line Records who continue to bring us the hottest and most cutting edge new artists on the musical landscape. First Cobra Starship, then Midnight Movies (another one of our current priorities!) and now Albert Hammond, Jr.! They have also been kind enough to hook us up with copies of Yours To Keep for all of your on-air giveaway needs, so don’t hesitate to be in touch if you want to get your hands on some! If you need more info, call Andy Gesner at 732-613-1779 or e-mail us at info@HIPVideoPromo.com. You can also visit www.NewLineRecords.com to find out more about Albert Hammond, Jr.