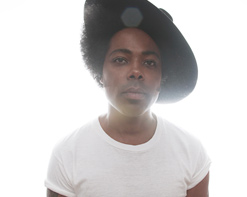 To say that Alex Cuba has had a busy 2016 would be a gross understatement. Following his 2015 win of the Best Singer-Songwriter Album at the Latin Grammy Awards, his new album, Healer, has been nominated by the National Academy of Recording Arts and Sciences for Best Latin Pop Album at the 2016 Grammys! On top of that, he’s slated to perform on Parliament Hill in Ottawa on Canada Day 2016, taking place on July 1st.

This Juno-winning artist is also hosting the inspiring new documentary Cuban Bus, which showcases Alex traversing the Cuban nation in a mobile recording studio, finding the best homegrown talent that island has to offer. It’s a unique and uplifting piece that shows his keen awareness for not just enticing an audience, but also his own benevolence.

The brand new video for “Sarah” (already over half a million plays on Spotify) is another showcase of the impeccable visuals of Alex Cuba. With “Are You” he used a hybrid combination of live action and miniature stop motion animation to create a steampunk-inspired clip. For the gorgeous and serene “No Esperes Más,” he enlisted directors Facundo Gastiazoro and Taylor Fox to paint a beautiful, animated underwater world of vibrant colors and mixed mediums.

“Sarah” is a beautifully simple piece, the video revolving around Alex and his crew perched in a stairwell as he puts down this intimate number. Outside in the Montreal night, it’s a touching story of seeking, and finding, that undeniable connection between two young lovers. Alex delivers the perfect soundtrack, and director Dan LeMoyne works in just enough bits of colorful animation over the live action to straddle the perfect line between fantasy and reality.

Time and time again, Alex Cuba brings us clever, compelling, and brilliantly executed music videos. “Sarah” is another video that you must see and hear, and we’re here to do anything we can to help make that happen. If you need more info on Alex Cuba or would like copies of the new album, Healer, please don’t hesitate to be in touch with us at (732)-613-1779 or email us at info@HIPVideoPromo.com.