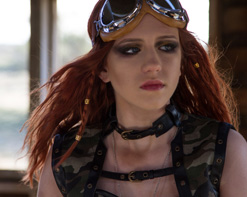 Alexa Friedman isn’t your average aspirational pop star. While most young artists want to sing and dance, they ultimately can’t get past their own youthfulness and inexperience. Perhaps it’s being the youngest of 3 girls, but she sure knows how to fight for what she wants. One look at her first music video for her single “Enraptured” and it’s very clear that Alexa is someone who aspires to go bigger and better than any of her contemporaries.

Perhaps it’s because Alexa has been stepping in front of the camera since she was only 4 years old. She began as the spokesperson for her parent’s small business, being featured in print, TV, and radio. One taste of that life and she had found her calling. Fast forward to 2017 and this 14-year old triple threat is annually working the Los Angeles circuit of acting, singing, and dancing. She’s already appeared in several shows such as The Middle, School of Rock, and Walk The Prank, as well as linking up with vocal coach and songwriter Estani Frizzell.

Her first single comes in the form of “Enraptured,” a song that puts a sultry rhythmic backbeat underneath an uptempo dance track that would slip right into any top 40 chart. All of this creates a dynamic palette for Alexa to showcase her pipes, which soar over top of the track with an effortless perfection. She also keeps listeners on their toes by dropping in a verse to showcase the fast and furious rap skills of Hector Munoz.

Knowing Alexa wanted to bring a Mad Max style feel to the concept, director Spencer D. Evans and the Spirinity Productions crew created a dystopian landscape with steampunk aesthetics in the middle of the desert, where everyday survival could not be taken for granted.

The video begins in this deserted world where Alexa finds herself in the middle of a literal treasure hunt. Even though she is strong armed out of the prize by a fiendish crew bent on domination, she keeps her leverage by cleverly keeping the key in her possession. After assembling her own crew, Alexa meets the others on the battlefield. In this instance, that is the makeshift dance floor amongst the burned up, hollowed out, and twisted steel of a junkyard. With fierce, fluid dance moves as their weapon of choice, it’s a battle for their respective futures. Fortunately for Alexa, she came prepared with all the right moves.

It’s a pleasure to be able to work the Alexa Friedman team to help get the word out about this exceptional young talent and her captivating new video. Please contact Andy Gesner and the HIP Video Promo team to find out more or to let us know what we can do to get this into your programming. Call (732)-613-1779, email info@HIPVideoPromo.com. You can also visit www.facebook.com/OfficalAlexa/ for more info on Alexa Friedman.