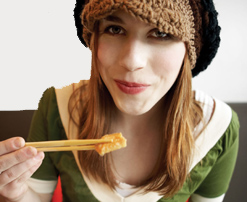 Greetings and salutations music video programmers nationwide! It’s Andy Gesner and the staff from HIP Video Promo, here with a brand new clip from a young artist with a timeless sound. Some singer-songwriters are an acquired taste, but Alexa Wilkinson isn’t one of them. Her music is immediately appealing, wholly ingratiating, and often undeniable. On her frequently-visited MySpace page (260,000 plays and counting), she cites Melanie as an influence, and that’s apparent in her music: like the early-Seventies legend, Wilkinson is poppy, offbeat, relaxed and confident, gently defiant, and slyly sexy.Lions, her latest set, sparkles from beginning to close, and seems poised to establish her as one of the freshest voices in alternative pop.

She’ll take her place there alongside the like-minded Josh Kelley, who has been a mentor, tourmate, and frequent collaborator of hers. Kelley co-wrote several songs on Wilkinson’s glittering debut and invited the young singer-songwriter out on the road with him; since then, she’s shared stages with Kate Voegele and Stephen Kellogg, and captivated crowds wherever she’d played. The singer-guitarist is currently on national tour with Todd Carey and Jonathan Clay, and regularly leaves indie audiences spellbound. And while she’s a force in concert, her successes aren’t confined to the stage: “Miles Away”, one of her best-loved songs, has already been featured on an episode of The Hills.

Alexa Wilkinson is a skillful acoustic guitarist and a vibrant singer, but her first instrument was the trumpet, and her spirited horn-playing is all over the multifaceted Lions. “Vanilla Rain”, the lead single, features a brass and wind section – trombone, saxophone, and Wilkinson’s own trumpet. It’s colorful and slightly whimsical, and it blends so seamlessly into the pop architecture of the song that it doesn’t feel at all unexpected. Unusual, yes; incongruous?, never. But the emphasis here is on Wilkinson’s storytelling, her emotional honesty, and her expressive performance. She’s mastered the toughest and most crucial trick of the confessional style: no matter how much verve she sings with, she still sounds as though she’s sitting beside you, crooning directly into your ear.

Gino Tomac’s crisply-directed clip for “Vanilla Rain” plays with those notions of intimacy and self-revelation, and presents the artist as a budding motion-picture star, singing her song much as a movie actress would perform her speaking lines. At first blush, the video seems tranquil and domestic: we watch Wilkinson in bed with a young man, softly singing her plea to his sleeping face. Later, they’re in the kitchen; she sits on the counter, and smiles as they chop vegetables together. It all appears homey, wholesome. But then a funny thing begins to happen: Tomac starts running some of the footage backward. Wine pours upward into bottles, the bed makes itself, shoes soar through the air and attach themselves to feet. Soon, it becomes apparent that we’re being told this story in reverse sequence: we’ve begun with a morning-after, and we’re tracing the course of a date from its conclusion to its beginning. We see the couple in the park, and then meeting in front of the New York City skyline – and then we watch the young man walk backward from his own house, slip on (off) a wedding ring, and return to his wife.

We are very excited to once again have the opportunity to work in tandem with Civia Caroline and the good people at Wilspro Management. Alexa will be on tour throughout the Spring, so please drop us a line if you’d like to catch up with her for a video interview when she comes to your market! If you need more info, call Andy Gesner at 732-613-1779 or e-mail us at info@HIPVideoPromo.com.