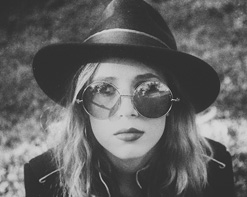 The eclectic duo of Anana Kaye and Irakli Gabriel are no strangers to adventure. Irakli has lived and performed in New York City for most of his life, while the golden-voiced Anana Kaye made her way to the States all the way from the Republic of Georgia. Their latest single is called “American Smile”, and through the layers of delicate guitar, smooth percussion, dreamy piano and enthralling vocals, this song tells a riveting story of a man on a journey in search of the “American Smile.”

“American Smile” was co-written with Freddie Stevenson, an accomplished Scottish-American songwriter and frequent collaborator with the duo. Irakli says of the song:

“Some years ago I was sharing an apartment in New York with my friend, a brilliant songwriter Freddie Stevenson. We were playing in a band together at the time and in the process ended up writing a bunch of songs. One eve after a few beers, Freddie said, ‘I’ve got this title, “American Smile.”‘ It struck a chord with me immediately, I knew we had to write it, so I grabbed a bass and started playing a progression and humming a tune. Freddie did not waste any time either, and we had opening verse and the song structure right away. The wordsmith he is, Freddie contributed most of the lyrics, which spoke to me right away and made sense on every level.”

The tale of the “American Smile” is decidedly wistful for the earlier half of the 20th century; a time when the American Dream was a well-defined reality. The self-directed and edited video features paintings by Esartia, a Georgian artist living in the United States, custom created to follow the story of the lyrics. Fingers are seen typing away on a typewriter while each word is so graciously emoted to us by Anana. She tells us about the man embarking on this journey, and the trouble he faces. He tears up all the sidewalks, cuts down all the trees, kicks down all the doors to which he doesn’t have the keys, and goes up to every stranger walking down the street to ask if they’ve seen the “American Smile”. His frustration mounts as the chorus blooms, knowing the world is changing around him. The American Smile is gone.

After reaching an impasse, father time becomes this adventurer’s greatest teacher as he feels remorse for the destruction he’s caused in his journey. He ultimately returns to the places he damaged, and fixes everything, twice over. It’s at this point that he has dreams of the American Smile, finally seeing it within himself. If a song has ever captured the zeitgeist of the United States of America, it’s Anana Kaye’s brand new single!

This song carries a deep message about the United States, a country known for always glorifying its magnificant past. Anana and Irakli explain that just because the original iteration of the American Smile left with “the girls waving goodbye,” does not mean it can’t be reimagined in a new sense today. The essence of The Smile lives within us, and by planting the seed of individual kindness, we can achieve greatness in peace.

It’s a true honor and profound privilege to continue to tell the dynamic Anana Kaye story and we’re ecstatic to share this clip with you and your viewers. Please don’t be shy about getting in touch to let us know what we can do on our end to get this video into your programming and rest assured we’ll have plenty of outstanding Anana Kaye merch to set up online/on-air contests and giveaways throughout the campaign. “American Smile” is a song that viewers and programmers on all sides of the musical landscape will relate to, and we do hope that it connects with the maximum amount of viewers. Should you need anything at all to make that happen, please don’t hesitate to contact Andy Gesner and the HIP Video Promo team at (732)-613-1779, email info@HIPVideoPromo.com. You can also visit www.AnanaKaye.com for more info on Anana Kaye.

For info about other Anana Kaye videos, click HERE