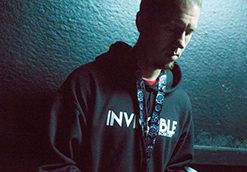 Drive east on Fort Union Boulevard from Salt Lake City, and just before the road is swallowed by the immensity of the Wasatch Range, you’ll find Alpha Coffee. It’s the last pit stop before you reach the foothills of the mightiest mountains in Utah – and if you’re thinking of taming them, or skiing them, or even rolling through, you might do well to begin your adventure with a cup of their brew. And if you were lucky enough to visit Alpha on the right day this year, you’d have found the state’s finest rap-metal band rocking the main room, shooting a clip for “Avengers”, the lead track on their ferocious Invincible album. The music of Andrew W. Boss has much in common with the coffee at Alpha: it’s invigorating, it’s served piping hot, and it tends to make those who experience it feel like the tallest peaks in the Rockies are no great obstacle to hurdle.

Boss and his bandmates strongly support Alpha’s mission. The coffeehouse was founded by veterans, and though they’re demobilized now, they haven’t forgotten where they came from or the challenges their brethren have to face. Alpha has sent thousands of dollars – and thousands of bags of coffee – to active military personnel. In Robert Eddowes’s kinetic clip for “Avengers”, we watch Alpha staff pack the good stuff in cardboard boxes for shipment overseas. As workers at the coffee shop prepare their donation for the troops, Andrew W. Boss and his band blast out the rapid-fire verses and muscular choruses to “Avengers”, pointedly waving an American flag as they do.

It’s that absolute conviction that makes Andrew W. Boss stand out among other genre practitioners. Everything he raps is straight from the gut, and he stands behind all of it with his arms crossed, ready to take on all comers. Boss makes his patriotism explicit in “Avengers”, and argues that some things – sacrifice, guts, love of country – ought to be beyond politics. The track is a good indication of the sort of heat that Boss and his band can bring in a concert setting, and it sets the tone for Invincible with a cannon shot. The set was produced by Jim Fogarty, who has also manned the boards for Killswitch Engage, All That Remains, and Shadows Fall, and he’s captured the incendiary force of the Andrew W. Boss live show with unerring accuracy. But don’t just take our word for it – ask anybody who caught the band’s wildly successful 2018 national tours with Bobaflex and Head P.E. They’ll tell you what every music fan in Salt Lake City knows: these guys are unstoppable.

Here at HIP Video Promo, we’re thrilled to partner with Andrew W. Boss to share the brand new “Avengers” video with the world! Please don’t be shy about getting in touch to let us know what we can do on our end to get clip included into your programming. Please contact Andy Gesner and the HIP Video Promo team at (732)-613-1779, email us at info@HIPVideoPromo.com.