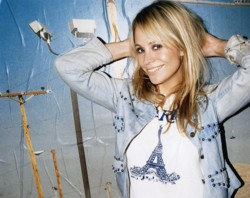 Hi everybody! It’s Andy and the staff from HIP Video Promo, back again to share another sensational video with you. We’re thrilled to be working with Big Beat/Atlantic Records to bring you the latest clip from the fetching Anne Lilia Berge-Strand – better known to Europhiles and fans of international pop music as Annie. Blonde, petite, and oh-so-alluring, the Norwegian synth-pop singer and songwriter has been called the Scandinavian Kylie Minogue (who has, in turn, been referred to as the European Madonna). Annie’s music lives up to the best work of both of her forerunners – it’s infectious, bubbly, warm, instantly welcoming, and seems as sweetly inevitable as the first rays of morning sunshine.

Though she’s not yet well known in the United States, Anne Berge-Strand has been a part of the Scandinavian pop scene for years. She was one of the first musicians to have her music released by the now-legendary Tellé Records, a label that did so much to define the image of far Northern European indie music. In fact, it was the success of her first single – 1999’s “Greatest Hit” – that put Tellé on the map, and made it possible for the indie outfit to expose the sounds of Röyksopp, Kings Of Convenience, Eple, and other Nordic worthies to an international audience. Only personal tragedy – the death of her collaborator and producer – kept Kristiansand’s most notable recent musical export from releasing her debut album before 2004.

Anniemal is that album. For a breezy dance-pop record, it’s remarkably varied, ranging from radio-friendly bubblegum to some surprisingly dark techno. Annie’s charming and instantly engaging voice sounds at home in every setting – but the more playfully adventurous the track is, the more this singer shines. If you spent any time in Europe (or even a Euro-friendly dance club in America) during the fall of 2004, you’re more than familiar with “Chewing Gum”, a preposterously sassy club hit that’s best described as the Scandinavian-pop equivalent of “Milkshake”.

For the American audience, Annie is leading with “Heartbeat” – a song that Pitchfork called the very best of 2004. It’s much more relaxed and reflective than the caffeinated “Chewing Gum”, and Berge-Strand coos the story of nightclub romance in a smooth, seductive purr. But when the drums kick in on the second verse, it becomes a swirl of rhythms and riffs, held together by an insistent bass pulse. Like the best work of St. Etienne – a group that Annie frequently recalls – this is a plainly digital recording that nonetheless feels like the work of a live band. It may be eminently danceable, but at it’s core, it’s a warm, gorgeous piece of singer-songwriter music.

Viewers of the “Heartbeat” video might be compelled to ask which is more beautiful: Annie herself, or the stark, rainy European streets she walks. As the lens slides in and out of focus, we’re treated to some gauzy shots of Annie in bed, black halter-top on, face down on her pillow, playing with a gray cat. These bleed into washed-out shots of public transit in a busy city – Berge-Strand presses her face against the clouded window of a bus, and leans against the guard rail of a ferry, watching a gull. Later, she rides a limousine in anticipation – singing always with a bright smile and a look of incipient joy. The camera slips, staggers, and hops around her; it’s a bit unsteady, like a skipped heartbeat. At times, it races to stop-action speed, only to pull back after a few seconds for long, slow images of Berge-Strand’s face.

Though this record is being distributed by VICE in America, Annie’s record label is Big Beat out of the UK. The best part about working with new labels like Big Beat (Atlantic) is that we get to be exposed to new and exciting acts. With a roster that is as varied and intriguing as any we have had the pleasure to work with, Big Beat will surely become a favorite of yours as it has become of ours. We have copies of the new Anniemal CD for any programmer prepared to support this deserving artist. If you need more info call Andy Gesner at 732-613-1779, or email info@HIPVideoPromo.com. You can also visit www.AtlanticRecords.com to find out more about Annie.