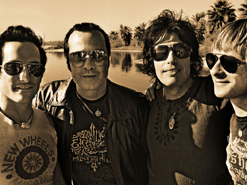 Greetings to all of my cherished programming friends! Fall is upon us here at HIP, but as the temperature drops, the rock keeps getting hotter! It’s Andy Gesner from HIP Video Promo, back with another excellent performance clip from a new band – albeit one with some familiar faces in it. In some ways, Army of Anyone is an archetypical Southern California indie rock band: they play with urgency and impeccable musicianship, they sing their songs with expansive and attention-grabbing energy, and there’s a dark and dangerous edge to every sunny chorus. But this quartet is no bunch of neophytes looking to make their mark. All four members of this Army are veterans of the Billboard charts and world tours. Drummer Ray Luzier backed up David Lee Roth for the better part of a decade, singer Richard Patrick was the founder and principal songwriter for industrial-rockers Filter, and bassist and guitarist Dean and Robert DeLeo were the twin pillars of Stone Temple Pilots.

Flashes of all three acts are apparent in Army of Anyone’s music. The DeLeos impart some of STP’s well-chronicled hookiness and muscular riffs, and the dexterous and powerful Luzier brings classic-metal toughness to the band’s modern rock. Patrick sounds as impassioned as ever, stringing immediately compelling melodies over tracks that draw from glam, grunge, heavy rock, and even a little contemporary pop-punk. “Goodbye” is a prime example of how much heat the chemical reaction between these musicians can generate: the songwriting is sturdy and subtly clever, the emotional intensity of the track is unquestionable, and the performances are stunning. Just before the final chorus, the grinding guitar and bass combination (one that provides a hypnotic framework for the track) falls away, and Luzier launches into a dazzling full-kit fill that’ll remind you of the glorious, glamorous excess of Eighties rock.

Anticipation for Army of Anyone is by no means limited to Southern California: fans of hard rock worldwide were only encouraged when the news leaked that Bob Ezrin would be behind the boards on the band’s debut, A Better Place. The man who captured the fury of Alice Cooper and refined the cinematic sweep of Pink Floyd was the perfect producer for Army of Anyone. He’s helped them craft a tapestry of sound, but he’s kept it slamming. A Better Place will be released in mid-November – think of “Goodbye” as a teaser, and a harbinger of ferocious things to come.

HIS Productions filmmaker Scott Speer is a stylish and poised director whose extensive track record belies his young age (he’s only 24); he’s worked on clips for acts as different as Switchfoot and Paris Hilton. He’s proven he knows how to represent the explosive energy of live performance, and his spot for “Goodbye” finds the members of Army of Anyone in a place where they’ve all become comfortable: onstage. Speer floods the performance area with cool illumination, and shoots flood-beams past the performers – but even as the stage appears washed out by light, the band logo glows a fierce orange-red behind the band. Halfway through the performance clip, Speer throws the viewer a change-up, and suddenly the empty hall is filled with screaming fans and vivid color.

We incredibly excited to be working with Deb Klein and all of the folks at such a cutting edge company like The Firm. They are in the process of a revolutionary approach to the music industry and we’re proud to be a part of their team. They have also hooked us up with plenty of copies of the “Goodbye” CD single, so if you need any for your on-air giveaway needs, don’t hesitate to be in touch. You can also expect to see them on tour in the very near future, so let us know if you would like to set up video interviews when they come to our market. If you need more info, call Andy Gesner at 732-613-1779 or e-mail us at info@HIPVideoPromo.com.