As Fast As “Florida Sunshine” 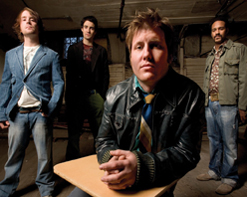 Hello to all my cherished programmers! It’s Andy Gesner and the crew from HIP Video Promo totally elated about getting to work with one of our favorite clients! Fourth Of July is over, and now that the full heat of the summer stretches in front of us, you’ll want to roll the windows down and let some Technicolor guitar pop-rock blare over your car stereo system. As Fast As, a quartet from Portland, Maine, has everything needed for the season: great melodies, platinum-plated hooks, big beats and bright rhythm guitar crunch, and a clear-voiced singer with style and attitude. They’ve named their lead single appropriately: this summer, everybody’s going to want “Florida Sunshine”. We’re thrilled to be teaming up with our hard working friends at Octone Records to spread the word about the band most likely to follow guitar-pop peers Rooney and Fountains of Wayne into the top 40.

Power-pop isn’t always adored by the scribes, but rock critics have been positively delirious about Open Letter To The Damned, the Portland, Maine quartet’s debut. Lead editor Stephen Thomas Erlewine of the All Music Guide calls the album “glorious”, and if it weren’t for the encyclopedia’s disinclination toward handing out perfect scores to new releases, he’d probably have given As Fast As the full five stars. (As it is, they earned four and a half – no easy feat!) Erlewine describes Open Letter To The Damned as “eleven bright, bold, ceaselessly catchy tunes that are so colorfully melodic, they sound like forgotten favorites upon the first listen”, and he compares singer-guitarist Spencer Albee’s songwriting to that of Elvis Costello, Nick Lowe, and Weezer.

“Florida Sunshine” – which was co-written with bassist “Hache” – is the band at is most insistent and immediate. Over a winding Rickenbacker bass riff and piledriver drums, Albee shouts out an irresistible melody that feels like it must have been attached to some lost Cheap Trick classic. Ever an incisive, clever lyricist (one of the best songs on Open Letter To The Damned consists entirely of lines pirated from personal ads), Albee’s delightfully angry wordplay further enlivens a track that already leaps from stereo speakers like a wild beast.

As Fast As, who have already shared stages with Unwritten Law and Gavin deGraw, are currently burning up the great American road with Morningwood and Butch Walker. Everything about Open Letter To The Damned suggests that the quartet is a ferocious live band, and, indeed, they were regularly named Maine’s outstanding concert performers by the Portland alternative press. Video director Kurt St. Thomas captures the single-minded intensity of the As Fast As gig experience, shooting the band in action at an outdoor house party. Indie filmmaker St. Thomas, well known in the Boston underground for his Corporate Sucker production company, keeps good rock company – he was one of the first journalists to interview Nirvana on tape, and his book on the legendary Seattle band has become a must-read for fans of grunge and Nineties alternative rock.

The wide field of St. Thomas’s lens frames the entire band, and the trailer-park detritus and cheeky warning signs that surround them. But Albee gets special attention, and he makes good on it, addressing the microphone with delicious petulance and stubborn charm. Other shots find an attractive young woman alone in a vintage auto. Although she primps in the window, it’s evidently not going anywhere. Is it propped up on cinderblocks in the front yard? Is she waiting for the singer, or isolated from him?

After such phenomenal success for Flyleaf within the music video arena, you can imagine how excited we are here at HIP to be working once again with Rebecca Olsen and all of the terrific folks at Octone Records. As Fast As is currently on tour with Butch Walker, so let us know if you’d like to set up interviews when they come through your town. Open Letter To The Damned is a must have album this summer, and luckily we have plenty of copies on hand for giveaways, etc. If you need more info call Andy Gesner at 732-613-1779, or email info@HIPVideoPromo.com.