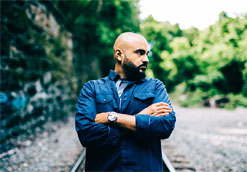 Ashok Kailath, also known as ash.ØK, reveals himself on his tracks, giving life to his work, creating a world unlike any other producer. Recording and documenting his vulnerability, it opens up a landscape of freedom and expression. He pairs generally dark lyrics around broken relationships over mournful eastern melodies contrasted by the pace and intensity of the production. On his 2017 debut album The Unraveled, he draws us in and tempts us to join his cinematic and heartbreaking journey.ash.ØK is a Philadelphia-based producer who is dedicated to his trap and hip-hop influences. With so many producers in the game, it is hard to stand out from the crowd but ash.ØK waves the flag for individuality. The Unraveled takes us into another realm, centering around loss and pain. More than two dozen artists from around the globe contributed to the record. The stand-out track “We’ll Waste Away” features famed Utah singer-songwriter Robyn Cage (who recently toured with members of Jefferson Airplane, Jefferson Starship, Hot Tuna, and The Grateful Dead) and world-famous Indian percussionist Jomy George, whose tablas, Mridingam, and other instruments are prominent. Cage and George’s additions to this electropop track are seamless, resulting in a piece of music that crosses genre and cultural borders.

Not only does ash.ØK have an ear for a great beat, he has an eye for exceptional visuals too. Directed by Purnima Puri with final editing by Rahi Patel, his music video for “We’ll Waste Away” was filmed in rural Kerala in India, while also depicting urban life. Due to the complexity of guerrilla film production techniques in India, the video took months to shoot. In the clip, a young woman is a victim of attempted rape by two off-duty police officers, escaping narrowly by stealing one of their guns. She runs back home, telling no one of what happened. Time passes and her brother unexpectedly announces that he’s arranged for her to meet a suitor for marriage. She obliges, but when she enters the room to meet her potential future husband, she immediately recognizes him as the man who attacked her.  She decides that enough is enough and leaves it all, running away to disappear in the city– but this time, she’s determined not to accept anyone else’s decisions or wishes to oppress her. Finally, she finds a new home in a secluded convent where she is accepted with open arms.

We’re honored to work with ash.ØK to share the “We’ll Waste Away” video, which spreads important cross-cultural messages of the #MeToo movement, empowerment, and freedom from cultural norms, as well as addresses a male-dominated culture that fails to properly condemn abuse and violence against women. We’d love to see this video added to your cherished programming and online presentations in a timely fashion! Rest assured we’ll have plenty of ash.ØK merch available for on-air contests and giveaways so don’t hesitate to get in touch. Proceeds from “We’ll Waste Away” will be donated to relief efforts for victims of extreme flooding in Kerala. For more information on ash.ØK please contact Andy Gesner and the HIP Video Promo team at (732)-613-1779 or email us at info@HIPVideoPromo.com. You can also check out instagram.com/callmeashOK/ for recent updates on this artistic powerhouse.