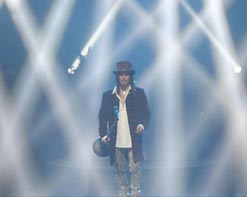 Across an astounding music career spanning nearly four decades and counting, the multi-talented John Payne is perhaps best known for fronting the rock supergroup ASIA from 1992 until 2006. In that time, the band released 8 acclaimed studio albums, a live DVD, several live albums, and toured the world over. In fact, Payne’s impact as the ASIA’s frontman was so great, that when the band’s original lineup reformed for its 25th anniversary, the other members contractually agreed Payne would continue his legacy under the name “ASIA Featuring John Payne.”

But before the band releases their long-awaited new album Americana, ASIA Featuring John Payne has gone ahead and recorded a treasure trove of beloved cover songs from the Prog era they’ve dubbed Recollections: A Tribute To British Prog. From that album, HIP Video Promo is delighted to present the clip for their stunning take on the Alan Parsons Project’s “Eye In The Sky.”

The song was the Alan Parsons Project’s most successful career release, reaching #3 on the US Billboard charts back in 1983. But “Eye In The Sky” has lived on ever since, canonized as a classic rock radio standard, and it’s easy to hear why. Its epic feel, haunting melody, and tenacious hooks made it a perfect choice for ASIA Featuring John Payne. Though the cover is faithful to the original, the modern fidelity of the recording lends the song a palpable depth while Payne’s vocals are riveting throughout, reaching an level of intensity in the chorus you’ve never heard before.

The video follows Payne through a Las Vegas casino, as he is continuously tracked by a mysterious figure watching his every move through the many “eye in the sky” cameras commonplace in such establishments. The clip – directed by Jonathan McHugh – also features the cast of the famed Vegas classic rock tribute “Rock Vault” as well as Scott “Carrot Top” Thompson in the role of a dealer with an unusual deck of cards. Payne eventually makes his way to the stage and the “eye in the sky” is ultimately revealed, but we don’t want to give too much away.

For more information of ASIA Featuring John Payne and the great clip for this classic song, please contact Andy Gesner and the HIP Video Promo staff at (732) 613-1779 or email us at info@HIPVideoPromo.com . You can also visit www.JohnPayneAsia.com for more info.