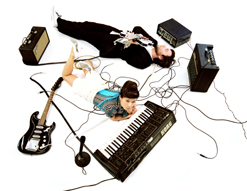 Hello music lovers everywhere! It’s Andy Gesner and the staff from HIP Video Promo, and we’re thrilled to be able to bring you the latest video from international pop darlings Asobi Seksu and their talented collaborators. Since the release of the acclaimed Citrus in 2005, Asobi Seksu has been in perpetual motion, appearing all over the world and winning devoted fans on four continents. They’ve played the hippest stages in America, streaked through Europe several times, performed at the Palacio Del Artes in Brazil and Teatro Juliana in Lima, and starred in Shibuya and Taiwan. They’ve toured with Ladytron, Dean & Britta, Mates Of State, The Dears, and other like-minded groups. This month, they’ll be returning to the U.K. as conquering heroes – the NME loves them (they’re playing the magazine’s annual awards show), and so do British audiences. Call them shoegaze, call them dream-pop, call them alternative rock; what matters is that the songs are terrific, and they’ve connected with listeners in every corner of the globe.

And although they surely never meant to, Yuki Chiudate and James Hanna have become pop icons. They’re a terrific-looking pair, and they’re naturals for video. Their clip for “Walk On The Moon” went mainstream: it rocketed to the top of mtvU’s Dean’s List. Asobi Seksu has become the rare indiepop group whose videos are as hotly-anticipated as their albums. Follow-up “Thursday” – one of the standout cuts on Citrus – was a gauzy, shimmering hallucination highlighted by Chiudate’s impossibly-charming performance.

Well, almost. Here in the New York metro area, the buzz about the upcoming release of Hush has been electrifying. The group has, once again, chosen to work with producer Chris Zane (Les Savy Fav, Calla); more importantly, they’ve written their best and most infectious set of songs yet. Once again, the group marries Chiudate’s sweet vocals to Hanna’s six-string storm – sometimes it’s lush, sometimes it’s spiky, but it’s always fascinating. “Me & Mary”, the first single, begins as an irresistible pop confection, but just before it concludes, it explodes into a maelstrom of guitar feedback, thunderous snare, and berserk electronic effects. It’s a remarkable illustration of the band’s emotional state: simultaneously welcoming and edgy, and full of invigorating surprises.

Asobi Seksu has deep roots in the NYC club scene, and they’ve made some talented friends there. Dan-Ah Kim is a well-known Brooklyn artist, animator and illustrator; she’s done exhibitions of her work on both coasts, and she currently has a solo show at the Giant Robot gallery on the Lower East Side. “Me & Mary” is Kim’s first foray into music video – but she’s had some high-profile help. Kim met Aaron Stewart-Ahn while working with him on a Michael Gondry film; since then, she’s extended her collaboration with the filmmaker. Stewart-Ahn directed what might have been the most staggering clip of 2008 – the video Death Cab For Cutie’s globetrotting, hypnotically-sexy “I Will Possess Your Heart”. Kim participated in that award-winning project; for the Asobi Seksu clip, they’ve gotten equal billing.

Kim’s illustrations in the “Me & Mary” clip – all hand-drawn – are breathtaking. She surrounds Yuki Chiudate and James Hanna with wavy lines, arrows, imaginary trees, black swirls, an animated lamppost. It’s all slightly spooky, and it goes perfectly with Chiudate’s understated mystique. She and Hanna perform in front of a white backdrop; they look at each other occasionally, but they never quite lock gazes. By the end of the clip, Chiudate is on he r back and deathly-still among the tall white grass, feathers blowing around her body as Hanna strums above her. It’s weird, and alluring, and beautiful, and not a little scary.

It is always a thrill to champion the top-notch Polyvinyl Roster, and Asobi Seksu is no exception! If you need more info, call Andy Gesner at 732-613-1779 or e-mail us at info@HIPVideoPromo.com. You can also visit www.PolyvinylRecords.com to find out more about Asobi Seksu.