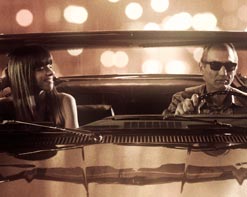 The story of AV Super Sunshine is much more than that of a man who rediscovered his passion for creating music; it’s the story an artist whose battle with severe depression, anxiety, post-traumatic stress syndrome and bi-polar disorder robbed him of many of his most creative years but who has re-emerged with a renewed vigor for doing what he loves. The pinnacle of that journey is the beautifully shot new video for “Baby Goodbye” and the modern sounds it displays with a combination of guitar-heavy hints of 60’s psychadelica and 70’s hard rock.

AV Super Sunshine’s DNA is comprised of influences from everyone from Led Zeppelin to The Small Faces to Emerson, Lake and Palmer. These impressions were manifested in the post-disco classic rock revival when AV started bashing out uptempo rock songs in a variety of bands. And then like a new ice age, AV became sort of frozen in time. For 15 years he made no music whatsoever. It wasn’t until 2009 when he hit rock bottom upon being diagnosed with a variety of mental illnesses. But instead of letting the diagnosis cripple him, he saw the opportunity to understand what had been ailing him for so long and took it upon himself to get out of his longstanding predicament.

What began as a regular appearance at an Oshkosh, WI coffee house where he eventually became the host culminated when he attended a songwriting seminar featuring well-known country songwriters James House and Danny Flowers, who quickly befriended AV. James was an instant supporter and quickly invited AV to Nashville to record his self-titled debut album. Of their friendship, AV says “He’s been really positive, a role model as well as a friend. James has helped me quite a bit.”

The new video for “Baby Goodbye” is the perfect video compliment to the sound of the song. The song is played out in front of an old cityscape projected onto the background in the style of 60’s cinema, and appropriately enough AV is seen cruising in a killer Pontiac GTO with a variety of groovy gals. Those shots are juxtaposed with scenes of AV and his band fully immersed in the vibes of the song and taking us back to another decade of psychedelic-infused good times. A constant kaleidoscope of colors and moving lights really brings it all together for a look and feel that brings the past roaring into the present!

From being a guy who could barely get off his couch to face the public a few years ago to being a touring rock musician has been a remarkable evolution for AV Super Sunshine. This blast-from-the-past is continuing with it because he thinks his music might help people. If you’d like more information on AV Super Sunshine or Victor House Records, please contact Andy Gesner and the HIP Video Promo crew at (732)-613-1779 or email us at info@HIPVideoPromo.com . You can also visit www.AVSuperSunshine.com for more info.