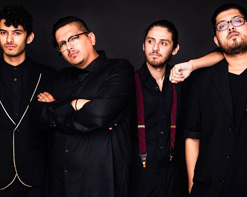 An “avantist”- or avant-gardist- is an experimenter; one who’s ahead of the curve, creating art that’s new, unorthodox, and experimental. Avantist, then, is the perfect name for a Chicagoland quartet of brothers that pushes the boundaries of progressive and post-rock. Luis (drums), David (guitar), Erick (bass), and Fernando (vocals) Arias grew up in a musical home, but it wasn’t just rock and roll they were surrounded by. Their father was a mariachi performer and later worked as a DJ for Spanish-language radio stations in the area. This has been a push for the band to constantly improve their musicianship; Fernando tells the Chicago Tribune that “He puts me to shame every time he sings.”

Since 2008- when Luis, the youngest, was only 13 years old- they’ve been creating music that’s as hard-hitting as it is eclectic, and as infectious as it is comical. Local Loop praised the band’s “expansive sound and technical intricacies that are often overlooked in favor of power chords and jangling melodies.” The band states, “We wear black to mourn life”; and cites everyone from Queens of the Stone Age, The Mars Volta, and Kings of Leon as influences. But it’s not just other musicians that inspire the Arias brothers to create: every aspect of life, from experiences to emotions to people, places, and things influences their music.

“Tidalwave” was originally released on TRANSRADICALMASH in 2013, and was re-released on the band’s self-titled album this year. It’s set to be included on the band’s Sony Records / The Orchard debut (due out later this year). The track takes the band’s post-rock-meets-prog-rock sound and adds a bit of surf rock and a small touch of punk for quite a unique flavor.

Filmed right in Chicago, the “Tidalwave” video was directed by Justin Nico Flocco. Our video stars a young professional on his way to work. He enters a coffee shop and greets the employees, only to spill his coffee all over himself. Once he gets to work, things get even crazier: he throws paperwork in the air, tosses his computer in the trash, and disappears in the middle of a meeting. When Avantist performs that evening, it’s an escape from the frustrations of daily living, as our hero “surfs” the streets of Chicago, riding in the back of a pickup truck.

Are you ready to get hit by Avantist’s “Tidalwave”? Please let us know if there’s anything we can do to get this music video into your programming! Avantist will be going on tour this July, so be sure to keep up to see when they’ll be in your area. For more information please contact Andy Gesner and the HIP Video Promo team at (732)-613-1779 or email us at info@HIPVideoPromo.com. You can also visit www.theAvantist.com for more info on Avantist.