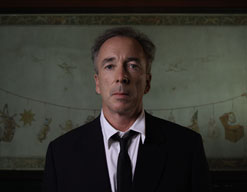 Hey there, dear programmers! It’s Andy Gesner and the rest of the HIP Video Promo crew serving up an ethereal clip that will conjure up your saddest senses. You may remember when we last worked with A Bad Think last year with their video for “Life Of A Grape.” Their next video, “Overstay,” is certainly one that will cement A Bad Think’s vision and sound into your head.

The video for “Overstay” puts A Bad Think’s leader, Michael Marquart, at the forefront of it all. You first see Marquart standing on the edge of a bridge, fully decked out in a suit. The scene changes to him singing to the camera and playing his guitar, later walking the lonesome streets reminiscing about a woman of his past. She haunts him like a distant memory in which she is barely tangible through a window and as she overlooks him playing on a bleak, empty stage. Eventually, she fades away, and you see Marquart literally drowning out his sorrows. All is not totally lost for Marquart though as he knocks some sense into himself, halting his suicidal thoughts and actions.

There’s no hiding the inherently depressing nature of A Bad Think’s “Overstay,” especially when you have Marquart singing over and over, “Concerned I’ll overstay my welcome / worry again and again I’ll overstay.” The tone of the track is produced in a way that it haunts you so much, you actually feel his pain.

It’s obvious that Marquart knows exactly what he’s doing, though. He’s a master of his craft and has been around for a long time. Not only does he helm A Bad Think under his own studio Windmark Records, he was, of course, the former drummer of the Grammy Award Winning Brit band A Flock of Seagulls. This multi-talent – think vocalist, guitarist, drummer, keyboardist, producer – is superbly skilled in creating that kind of otherworldly sound that is meant to linger. “Overstay” is just the most recent example of this, which you’ll be able to find on A Bad Think’s album Sara Lee.

We’re excited that we have this honor to work with A Bad Think and Marquart once again. We’re well stocked with copies of the new Sara Lee CD or your on-air giveaway needs, so please don’t hesitate to be in touch if you’d like some copies. If you need more info, call Andy Gesner at 732-613-1779 or e-mail us at info@HIPVideoPromo.com. You can also visit www.Windmark.com to get more info about A Bad Think.

For info about A Bad Think’s previous video, “Life Of A Grape” click HERE