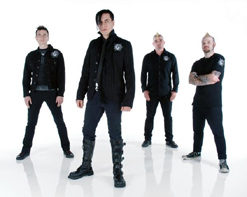 Greetings programming friends, it’s Andy Gesner and the staff from HIP Video Promo, here to share a visually-stunning performance clip by an exciting, genre-straddling industrial band. Their album titles have always been fixated on the world to come: As The Reasons Die,Where Shadows Lie, Bleed The Grey Sky Black. But don’t be scared off by the names of their records, or, for that matter, the name of the group. Bella Morte means beautiful death – but the Charlottesville band isn’t downcast at all. On the contrary: they sing about transcendence and mystery, encounters with the unknown, and peering behind the curtain of perceived reality. A trip through a Bella Morte album is a bracing one: confident, kaleidoscopic, often otherworldly, and occasionally even life-affirming.

As the band’s popularity grows, more and more people are making that trip. Fans of the Gothic are already firmly in the band’s camp – but recently, listeners with limited exposure to industrial and darkwave music have become interested in Bella Morte’s music. In fact, we can’t think of another industrial band better positioned to capture the ears of the mainstream than this one. There are three clear reasons for this: first, Bella Morte incorporates elements of mainstream rock, heavy metal, and new wave-inspired synthpop into their sound. Second, singer Andy Deane has one of the most consonant and commanding voices in the genre. Third (and most importantly), Bella Morte are inspired tunesmiths as well as effective beatmakers. Their songs often feature rousing choruses, melodically-sophisticated verses, and irresistible hooks. Many industrial and darkwave bands are likened to The Cure; Bella Morte is one of the few with the musical and lyrical smarts to deserve the comparison.

Find Forever Gone”, the first single from the just-released Beautiful Death, is a perfect example. It’s deep, ominous and brooding, but it’s also tightly-crafted: the stops and starts feel vertiginous, the processed six-strings cut like a razor, and gorgeous multi-part vocal harmonies brighten the chorus. Multi-instrumentalist Micah Consylman switches between delicate piano arpeggios and scalding synthesizer; drummer Scotty Derrico keeps his foot on the accelerator; Deane howls over the storm like a siren. It’s a good indication of how compelling Bella Morte is in concert – this is no studio-only industrial band, but a terrific live attraction that has drawn sellout crowds in hip clubs all over the country.

Eric Thomas Craven’s kinetic clip for “Find Forever Gone” captures the quintet in performance. But this is no ordinary gig: colored gels shine strange lights on the musicians, and stark and evocative images (an abandoned structure, a tree in autumn, Andy Deane’s impassive face) play on a screen behind the band. If that isn’t destabilizing enough, Craven swings the camera through the set in a dizzying ellipse, capturing a range of emotions and expressions on the faces of the instrumentalists. It’s an awfully telegenic group: they’re young, glowering, and theatrical, and wholly invested in the spell their music casts over listeners and viewers. And they never look better than they do when the director pulls the colored lights: Bella Morte plays in an all-white wardrobe, autumn leaves swirling around their bodies in motion.

As always we’re excited to be working with the good folks at Metropolis Records to bring you this new clip. They’ve set us up with plenty of copies of Beautiful Death for on-air giveaways so hit us up to get your hands on them. If you need more info, call Andy Gesner at 732-613-1779 or e-mail us at info@HIPVideoPromo.com. You can also visit www.Metropolis-Records.com orwww.BellaMorte.com to find out more about Bella Morte.