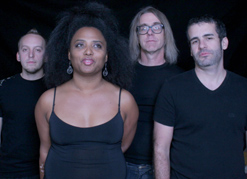 Hello cherished programmers! It’s Andy Gesner and the staff from HIP Video Promo, here to spread the word about the latest clip from an exciting, genre-busting combo. In the past few years, Amy Winehouse has drawn deserved attention for her fusion of classic soul, basement punk, and raucous garage rock. We like her recordings as much as the next guy, but let’s be fair: she’s not doing anything that The BellRays haven’t done consistently over the last decade. Since 1992, the California quartet has turned out album after album of scalding punk-soul, played with staggering commitment and unbridled passion; they’ve backed their records up with a live show that’s nothing short of phenomenal. If the sounds on Hard, Sweet And Sticky, their latest set, seem awfully hip, don’t get them wrong. They’re not following anybody’s trends – it’s just that the world has finally caught up to The BellRays.

Indeed, they are a ferocious unit: drum-tight, bar-room smoky, funky when necessary, respectful of classic records but always ready to carve out their own place in the rock ‘n’ roll canon. But any discussion of The Bellrays must begin with their remarkable frontwoman. In Lisa Kekaula, the BellRays sport a gritty, versatile soul shouter who can go toe-to-toe with anybody in any genre – and she’s never sounded better than she does on Hard, Sweet And Sticky. Kekaula roars through the bracing “Psychotic Hate Man” like vintage Tina Turner, testifies like a social crusader on the topical “That’s Not The Way It Should Be”, and croons out her heartbreak on the gorgeous “Blue Against The Sky”. Guest appearances on two Basement Jaxx cuts – both of which hit the Top 30 in the UK – introduced her singing voice to an international audience and made her an internationally-recognized star. We’re pleased to report that she’s returned to the States stronger from the experience, but no less committed to establishing the BellRays as hitmakers in their own right.

“Infection”, the lead single from Hard, Sweet And Sticky, is the Bel lRays at their most compulsively danceable: the drums pound and the guitars squall, and Lisa Kekaula’s performance is magnificently commanding. She’s a gigantic presence on the microphone, summoning the faithful to the dancefloor. The “Infection” clip illustrates just how irresistible her call is: she’s even gotten big red bears to move their bodies to the BellRays. Of course it’s just a man in a bear suit – but his movements are so fluid and natural that you’re liable to slip into the illusion. Certainly the unsuspecting pedestrians on the city streets where the video was shot were impressed, even if they don’t all want to admit it – while some look askance at the bear, most are swept up by his enthusiasm. But the plush red bear doesn’t just move with passersby: he breakdances in the center of the road, makes out with a mannequin, and picks a dance fight with an equally talented giant eagle. Finally, another bear refuses his overtures, at least initially. But she, too, finds that the rhythm is its own master, and the bear is adorable, and talented, too, and before you know it, she’s up on her feet, swinging along to the sound of the BellRays. .

It is our greatest pleasure to be working with Brandon Phillips and the tea m at Anodyne Records on The BellRays “Infection” clip. They have been kind enough to hook us up with plenty of copies of their full-length, Hard, Sweet And Sticky, so don’t hesitate to get in touch for your on-air giveaway needs. If you need more info, call Andy Gesner at 732-613-1779 or e-mail us at info@HIPVideoPromo.com. You can also visit www.TheBellRays.com to find out more about The BellRays. .