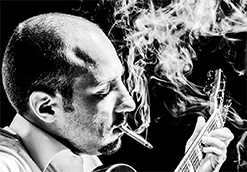 Many artists are anxious about sharing their influences. They don’t like to talk about the shoulders they’re standing on; they prefer to present themselves as free agents with no debts to their forerunners. Well, none of that nonsense from Benedict Sinister: he makes citing his sources into an art. His smart, sexy, sharply-observed songs are a fusion of adult alternative and chill house, and they’re replete with references to singers, writers, poets, and raconteurs. Even his name contains a clever nod to Nabokov (and The Fall). “Ne Dramatise Pas,” his latest single, name-checks Baudelaire, Karl Lagerfeld, and Serge Gainsbourg in between verses assembled from songs written by former Roxy Music frontman and Rock and Roll Hall of Famer Bryan Ferry. The “Ne Dramatise Pas” clip we’re sending you today is the only lyric video we’ve ever encountered that includes copious footnotes.

You could describe this video as a PhD thesis mashed up with the Victoria’s Secret Fashion Show. Most of it belongs to the stunning model Anastasiya Schlegova, who flirts outrageously with the camera. She’s not the only beautiful girl in the clip, either: there’s also a DJ in provocatively short shorts and a near-naked dancer with mirror-ball glasses and nipple guards. That Benedict Sinister is an appreciator of gorgeous women is no secret to anyone who has followed his career. However, the skin on display in the “Ne Dramatise Pas” is also a further tribute to Ferry, an inveterate romantic who never passed up an opportunity to put a supermodel on an album cover or in a video.

Like Bryan Ferry, Benedict Sinister is a man of great discernment: a fellow sybarite, a connoisseur, a follower of the path of experience, and a figure shrouded in mystique. Benedict Sinister has not yet felt fame in this country, but that suits him just fine – as a proudly rootless cosmopolitan, he’s disinclined to settle down. He’s left traces of his project in Paris, Sydney, Los Angeles, and in many less fashionable corners of the globe. Wherever he’s gone, he’s made music, and he’s participated in the art of living well, which is, perhaps, his most significant contribution to culture. He’s not a man who likes to tip his hand or leave audiences many breadcrumbs to follow. For now, he asks you to be content with his latest stunner of a track – which ought to be more than enough.

Bella Thorne missed out on a role in the “Ne Dramatise Pas” video, and even lost her mind in a YouTube video because of it. Perez Hilton took her side and panned the video, saying Benedict should’ve cast Bella instead. But regardless of what the tabloids say, Benedict Sinister is an artist to watch and we’re thrilled to be sharing the “Ne Dramatise Pas” clip with you. We’ll have plenty of Benedict Sinister merch, including copies of his hardcover book No Good Will Come Of This, for you to set up contests or online giveaways. Please get in touch to let us know what we can do to help get this clip into your programming in a timely fashion. Please contact Andy Gesner and the HIP Video Promo staff at (732)-613-1779 or email us at info@HIPVideoPromo.com. You can also check out www.benedictsinister.com for more info.