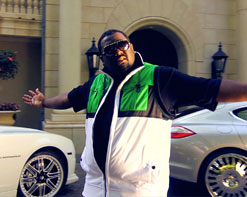 East Coast rap style meets Southern party attitude in one undeniable package. Programmers, it’s Andy Gesner here with Houston’s biggest local name in hip hop – Big “Boss” E. He has built his empire from the ground up and teamed up with Bun B and Slim Thug for the powerhouse slam “Been About Bread,” which radiates with the highest quality cinematography, cars, rhymes, vixens and delivery. We’ve also included Big “Boss” E’s “Fat Boy” video to fortify this H-town representative as the unmistakable voice of Texas hip hop.

You’ve probably heard that everything is bigger in Texas. Big “Boss” E is here to enforce this sentiment. His larger than life style and lyricism has taken him from a small contender to the biggest name in Houston, Texas. Big “Boss” E raps about his swag and his accomplishments, which are worthy of attention indeed. The Southern rapper has been hustling the parties and the streets all around the city, passing copies of his mixtapes and albums physically and digitally. Big “Boss” E made a big debut splash in 2009 with his album Grape Jelly, hosted by the legendary DJ The Empire. Ever since, he’s been building his name and brand with mixtapes and blog appearances including AllHipHop,WorldStarHipHop, antimusic, Mixtape Factory and many more.

“Been About Bread” is East Coast hardcore meets Southern swagger. The track flows in Big “Boss” E’s signature flow, reminiscent of his idol, Snoop Dogg, and rappers like T.I. and Lil Wayne. “Boss” has deployed his biggest weapon on this undeniable track – his network. The song features Bun B and Slim Thug trading verses on the microphone. The grandeur doesn’t just stop there either. Big “Boss” E employs top notch production in the audio and the video realms simultaneously. Full of bumping beats, the track will get you nodding your head almost instantly. Taking place inside a bank vault and an airport, this video offers exclusive locations decorated in expensive cars (it’s not every day that you get to turn a bank vault into the city’s hottest nightclub, after all). We should also put it out there that “Been About Bread” contains some of the most gorgeous video vixens around. Yes, it’s good to be the “Boss.”

Because Big “Boss” E doesn’t mess around, he’s included his video for “Fat Boy” for you to check out as well. The clip plays out like an oversized hip hop version of Lifestyles of the Rich and Famous, with the “Boss” golf course designed by Arnold Palmer himself! The clip also features Big “Boss” E’s signature Fat Boy Cadillac, all decked out in red. In short, it’s a party of massive proportions and will make you quickly forget that we’re in any form of recession. Big “Boss” E knows that the best cure for anything is a good time, and delivers it in maximum attention-grabbing style.

Both of the tracks come from Big “Boss” E’s new DJ Drama Hosted mixtape, Grape Jelly Hoe 2. We urge you to grab it free online and join us in getting these top notch clips to the hungry viewers out there. If you need more info, call Andy Gesner at 732-613-1779 or e-mail us at info@HIPVideoPromo.com.